Reprinted from the Thoroughbred Daily News 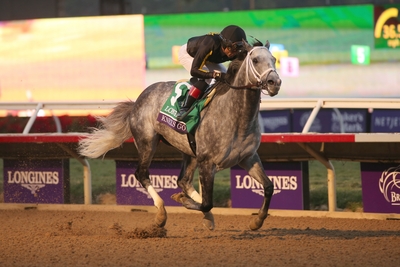 The 6-year-old Knicks Go earned a rating of 129 for his Classic win at Del Mar, and is widely expected to be named the U.S. Horse of the Year at the Eclipse Awards on Feb. 10 off a campaign that also included victories in the GI Pegasus World Cup Invitational Stakes, the GI Whitney Stakes, the GIII Cornhusker Handicap and the GIII Lukas Classic Stakes.

Knicks Go, who is trained by Brad Cox and owned by the Korea Racing Authority, is set to defend his title in the Pegasus this weekend before heading to stud at Taylor Made Farm in Kentucky.

“He's got a ton of class and he's a very intelligent horse,” said trainer Brad Cox during the virtual ceremony. “He's been at this for a few years now. Some of the things that set Knicks Go apart from other very good horses is definitely his ability to shut off things mentally. He's aggressive training, but when he's finished training he takes a deep breath and relaxes. He's gotten better as he's gotten older mentally and I think that's one thing that really benefitted him this past season.

“GOING INTO the Classic we had a lot of confidence in him. He was training really well and he obviously had a fantastic start to the season. We had a little bit of a setback with a race in New York, the [GI] Met Mile [when fourth], but then he really started capping off a nice string of races. Obviously his second half of the year was fantastic with big wins at Saratoga and Churchill, and ultimately the Breeders' Cup Classic was the race that put him in a position to become the top-rated horse in the world.

“He had a fantastic year and this was the cherry on the top with regards to what he could accomplish in 2021. It's a very prestigious honour to be mentioned along with the past recipients of this award, champions throughout the world, and to be at the top is just a true honour and something we're very proud of.”

A trio of European-trained runners were joint-second with ratings of 127.

Godolphin's G1 Derby winner Adayar earned that mark with his win over older horses in the G1 King George VI and Queen Elizabeth Stakes, and the Charlie Appleby-trained colt was the first 3-year-old to record the Derby/King George double since his grandsire Galileo 20 years earlier.

Coolmore partners' St Mark's Basilica, who went unbeaten in four starts on the season encompassing the French Classic double of the G1 Poule d'Essai des Poulains and the G1 Prix du Jockey Club, the G1 Coral Eclipse S. and the G1 Irish Champion S. to be named Europe's Horse of the Year and champion 3-year-old colt. St Mark's Basilica earned his rating of 127 in the Coral-Eclipse.

Adayar and St Mark's Basilica were joined at 127 by Mishriff, who compiled an intercontinental Group 1 campaign.

The 2020 G1 Prix du Jockey Club winner won the Saudi Cup before it achieved Group 1 status, as well as the G1 Dubai Sheema Classic in the Gulf region. He returned to Europe to hit the board behind St Mark's Basilica and Adayar in the Coral-Eclipse and the King George before romping by six lengths in the G1 Juddmonte International, where he earned a rating of 127. Mishriff is preparing to defend his Saudi Cup title next month.