FAIR HILL, Md.--One year ago Keri Brion, after serving as assistant trainer to Hall of Fame trainer Jonathan Sheppard for 11 years, was just saddling her first horse in her own name as trainer. 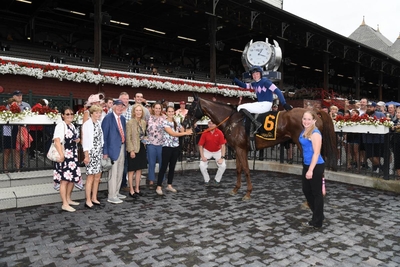 The Mean Queen in the Winners Circle of the Jonathan Sheppard, Keri Brion on the right (Photo courtesy of NYRA)One year ago she had eight horses in training.

One year later, Brion has two of the three horses nominated for an Eclipse Award, she has won all but one of steeplechasing's 2021 Grade 1 races, won the Leading Trainer, Money Won title with $763,450, and will have close to 50 horses in training when steeplechasing resumes in March.

Along with all that, she was the first American based trainer to saddle a hurdle winner in Ireland and propelled two of her owners, Buttonwood Farm, owned by the Moorheads,  and Irvin Naylor, to first and second respectively in Owner, Money Won.

Buttonwood's The Mean Queen won four stakes, including three G1 stakes, the Jonathan Sheppard, the Lonesome Glory and the Grand National, won the Horses, Money Won title with $303,000, almost three times as much as second placed Snap Decision, and seems to be a shoo-in for the Eclipse Award.

THE OTHER TWO nominated for the Eclipse Award include Snap Decision, trained by Jack Fisher, who won the G1 Calvin Houghland at Iroquois and the G2 Temple Gwathmey but placed second to The Mean Queen twice in thrilling races, the Lonesome Glory and the Grand National.

The third is Baltimore Bucko, also trained by Brion and owned by Buttonwood, who won the G1 A.P. Smithwick and finished second to The Mean Queen in the Jonathan Sheppard but died in a fall in the William Entenmann Stakes.

"It's mind blowing," said Brion. "I read somewhere that The Mean Queen would win the Eclipse bar voter fraud or a natural disaster."

After her record setting first year in training, Brion says she is working on having the sames results this year.

She just returned from spending five weeks in Ireland. where she had planned on spending four weeks, partly as "a bit of a holiday," and partly to buy horses, but she tested positive for Covid and had to quarantine for a week.

"Everyone over there seems to have tested positive for Covid," said Brion, and that, Covid, has derailed the plan to send The Mean Queen to Ireland to train in preparation for a run at Cheltenham, England's premier steeplechase meet with 14 G1 races in March.

Brion said that the Moorheads wouldn't be able to go to England as things stand now with Covid, so they had decided to keep The Mean Queen here and aim for the G1 Calvin Houghland at Iroquois this year and hope to go to Cheltenham next year.

While in Ireland, Brion bought 10 horses, including two for Buttonwood, one of which is a brother of Galway Kid, owned by Ed

Swyer's Hudson River Farms, who was Brion's first stakes placed winner with his win in the G3 David Semmes Memorial Stakes at Great Meadow last May.

Brion said she has two new owners, one of whom bought a filly by Doyen (Ire), who is the sire of The Mean Queen.

Nine of the 10 she bought for various owners are maidens with the tenth being How Ya Bud, who won a maiden race at the Christmas Festival at Dublin.

"I have another two flat horses coming soon," she said. "The ones I bought in Ireland will stay in training there until February, because the weather for training is better there. All we can do here is jog on the roads."

Brion will continue to train at Fair Hill, where she has a barn with 30 stalls, and will get an additional 10 stalls at trainer Kelly Rubley's barn plus another group of stalls in another barn.

Brion said she is looking to have quality over quantity.

"I'm trying to buy quality horses," said Brion. "I want things to stay the same this year as they were last year, I don't want people saying last year was beginner's luck."