GRANTVILLE, Pa.--Bernie Houghton won four races, including three for his mother Betsy, and claimed two horses over the Christmas season, all at Penn National racetrack. 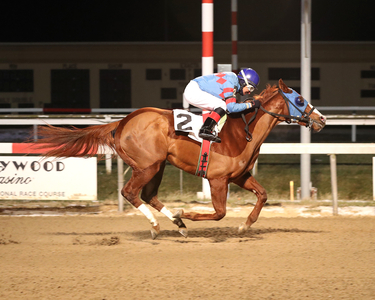 Sassy Lad (Photo by Equiphoto)Graham Motion had two winners, including a Stakes win at Gulfstream Park.

"He's a nice horse," said Houghton. "We like him a lot. He's a half brother to Beyond the Bend, who won a lot for me."

Sassy Lad is out of Sharp and Sassy by Golden Lad, and that was just his second start.

He won by 3 3/4 lengths over Bee the Boss, owned by Debra Kachel and trained by Ricky Hendriks.

"When you break your maiden, there's not a lot of races for a horse at Penn National," said Houghton. "He's been in training since last September, so I may just take him home and turn him out for a while. Freshen him. Then there's Laurel to look at."

Houghton's other two wins were in Maiden Claiming races, both at 6 furlongs, with Sylmar Farm's Sister Sadie on Dec.15 and Morgan's Ford Farm's homebred Strands of Pearls on Dec. 10.

He claimed two horses on Dec. 14, Ninja Princess and She's Achance Too.

"I claimed Ninja Princess for Ed Madden," said Houghton. "He takes my kids to horse shows, and he wanted to get in the game. He picked her out himself. And I claimed She's Achnce Too for Richard Bosshard. He wants her for a brood mare."

Unhurried early, Bipaerisanship tried to get through on the inside but got bottled up until finding an opening in deep stretch and getting through to win by 1/2 length.