BENSALEM, Pa.--McLane Hendriks just got his trainer's license one month ago, but he wasted no time in saddling his first winner. 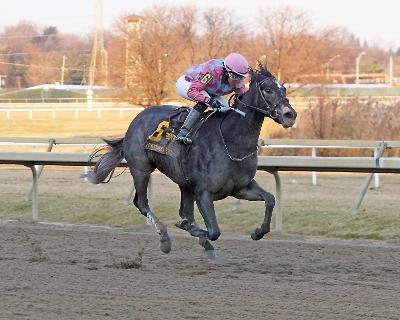 Witty winnint eh Nursery Stakes (Photo by Equi-photo)Not only did he have a first winner in such a short time, his first win was in the $200,000 Pennsylvania Nursery Stakes with his mother, Elizabeth M. Merryman's Witty.

"It was very exciting," said Hendriks, who comes by his talent naturally as both his mother, Liz Merryman, and father, Ricky Hendriks, are both very successful trainers. "I've had my trainer's license for a little over a month. Before that, I had a steeplechase trainer's license."

Witty, steadied in tight early in the 10 horse field, angled out on the turn and drew away under moderate urging to win the 7 furlong Nursery Stakes by 5 1/2 lengths.

"Mom bred Witty," said Hendriks. He's a half-brother to Caravel. Mom still has the mare, Zeezee Zoomzoom. I started as assistant trainer to Mom, and then I took the reins on Witty from her at the beginning of September."

Caravel was a multiple stakes winner for Merryman before she sold a majority interest in the filly to Bobby Flay.

"THIS WAS Witty's third start," said Hendriks. "His first at Laurel was very impressive. He broke slow and weaved through horses and finished second. Then at Parx he broke his maiden by about 5 lengths with very good speed numbers. That made us confident that he was ready to step up to a stakes."

"I feel very fortunate to have the opportunity to have this horse and to have him win after I'd only been training one month," said Hendriks.

Hendriks gave his mother all the credit for his win.

"We could take Witty to New York and race him there in a one turn mile race," said Hendriks. "But I don't like one turn miles. I also just nominated him to the $100,000 Juvenile Stakes at Parx."

GRAHAM MOTION had three recent winners, including one stakes win.

Vergara raced just off the pace, swung four wide into the stretch and won by 3/4 length under strong urging.

Motion also had two winners on Dec. 4, one at Aqueduct and one at Tampa Bay Downs.

Amigos was up close throughout, swung three wide on the turn and drew clear in the stretch to win by 3 1/2 lengths.