Jenkins and Motion have stakes wins, Houghton, Fisher and Dickinson have winners 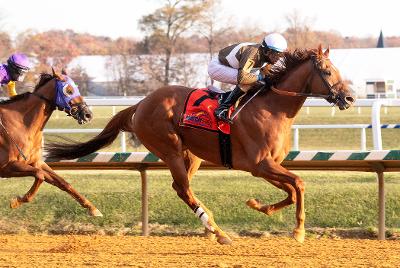 Cordmaker, a 6-year-old gelding, settled near the pace, swung four wide entering the stretch, took control in mid stretch and was geared down to win by 1 3/4 lengths.

"He's a nice horse," said Jenkins. "He's easy to get along with and easy to train. I think there's another MATCH race coming up, so we may run him back in the MATCH series."

Sy Dog is now two for two, having won his first race, a maiden special weight, on Oct. 24.

He settled three wide near the back of the field, angled six wide into the stretch and just got up to win by a nose.

Lee Glassberg's Cypt won an $18,800, 1 mile and 70 yards Claiming race after American Forces was disqualified, and then Crypt was claimed by Joseph Besecker to be trained by Brandon Kulp.

This was Mystical Man's second Allowance win at Laurel after finishing second, also in an allowance race, after Fisher bought him for Bruton Street.

Michael Dickinson saddled Augustin Stable''s Royne, who is a homebred by George Strawbridge, to win an $80,000, 1 mile Maiden Special Weight on the turf for 3 year olds and up at Aqueduct on Nov. 20.

Royne won by a nose in his fifth start and now has a win and two seconds and earnings of $68,207.