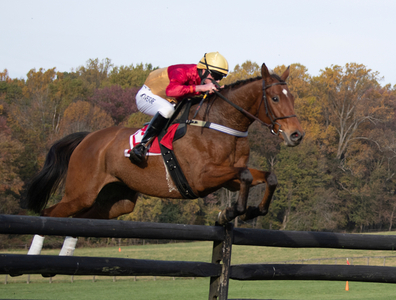 Goodoldtimes (Photo by Tod Marks)Owned by Armata Stable, trained by Alicia Murphy and ridden by Colin Smith, Goodoldtimes, never far off the pace set by Renegade River, moved into the lead after the last fence and won by 2 lengths over Mystic Strike, with Renegade Rover. trained by Willy Dowling and ridden by Parker Hendriks, finishing third in the five horse field.

Upland Partners' Mystic Strike, trained by Todd McKenna and ridden by Skylar McKenna, had been going for his third consecutive win in the Hunt Cup.

"We were ecstatic," said Murphy. "We've had Goodoldtimes for about a year. The idea when we got him was for us to fox hunt him and then send him on to another trainer, but luckily we got to keep him."

GOODOLDTIMES had previously been trained by Leslie Young, Murphy said.

He didn't start until he was 5, and then started twice in 2019, winning his second time out in an allowance race at Pine Mountain.

In 2021, trained by Murphy, Goodoldtimes finished third four times before winning the Hunt Cup under Smith, who was riding him for only the second time..

"Colin is a local kid who worked for Todd and Blair Wyatt, where he learned a lot," said Murphy. "I think he won one race for Todd. Then he quit riding and went to work for a heating and plumbing company. Last spring, he rode in the (Foxfield Farm) Team Chase for me. Then he rode Goodoolldties at Genesee, and I knew he'd be good on this horse. He gave him a flawless ride in the Hunt Cup."

"Billy Santoro will hunt him this winter," said Murphy.

Santoro said that he knew Goodoldtimes was a good jumper but that he wasn't fast enough to win over a shorter distance, but that the 4 mile distance was good for him.

Asked if Goodoldtimes would run in the Maryland Hunt Cup next spring, Murphy said, "If you ask the owners, I know what their answer will be."

"I look at that race with loathing and fear," said Murphy. "I live very close to the Hunt Cup course, and it's a very scary course."

All the same, it appears that's where Goodoldtimes will be aimed.

THE FIRST race at the Pennsylvania Hunt Cup, the $15,000, 3 mile Maiden Timber, was a disaster, with eight horses starting and only one finishing.

Upland Partners' Shootist, trained by Todd McKenna and ridden by Skylar, ,was the only one left standing and won easily

On the live stream, it was impossible to tell which horses had lost riders or had fallen, and race announcer Will O'Keefe apparently had no idea, either, as he never called any horse being out of the race, and most of the time was wrong about who was in front.

Two horses fell heavily at the second to last fence.

Skylar was smart enough to steady Shootist coming to the second to last, a big, upstanding timer fence, while the jockeys on the only two other horses left standing at that point ding-donged into it, intent on winning.

The maiden timber horses, ridden at speed into that fence, were unable to handle it and fell.

"The race went the way I'd planned it until the second to last fence, where I thought I'd had it won, but then when I got the lead, he put the brakes on," said Watters. "He's a big horse, but he finally got going again. Mark had the horse really nicely set."

"Jonathan always sponsored this race, so it seemed appropriate for me to sponsor it, too," said Brion. "Jonathan always then entered a horse in the race and said to the jockey, win this so I don't have to pay."