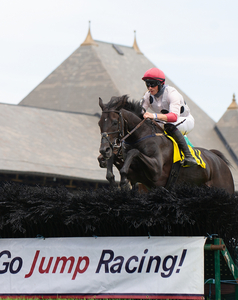 "He's a good old boy," said Brion. "He had always been pointed towards this race, We used the race at the Gold Cup as a prep for this, as he hadn't run all year. We knew he'd run big. I was happy with him."

Iranistan had a year off after being hurt.

"Iranistan is 7 turning 8, but he's only eligible for graded races now," said Brion. "He'll get he winter off and then we'll give him a shot at the Iroquois next spring."

Brion also had a winner the same day at Calloway Gsrdens.

"A Silent Player had bad luck this year," said Brion. "We used him to fill races at Saratoga. Parker had the idea to run him in a steeplethon.  We just schooled him over timber once before we ran him at the Gold Cup, so we were conservative with him there. We just wanted to see how he jumped over those fences."

"He's a tough guy," said Brion. "He broke a hind leg at Callaway last year, so he has a plate and some screws in his leg. He's amazing that he could come back from that."

BARRY FOLEY and Jamie Bargery each won three winners.and each was for three different trainers.

Then Foley won the next three races, beginning with the $20,000 Ratings Handicap Hurdle on Melissa Cantacuzene's Yankee Doodle Boy for trainer Doug Fout.

Then he rode Kinross Farm's Sea Mast, trained by Richard Valentine, to win the $15,000 Maiden Claiming Hurdle followed by a win on Irv Naylor's Scorpion's Revenge, trained by Cyril Murphy, in the $25,000 Maiden Hurdle.

Bargery returned in the $25,000 Maiden Hurdle to win on Riverdee Stable's Queen's Empire (Ire), trained by Jack Fisher, and he won his third race on Beverly Steinman's Eve's City, trained by Doug Fout, in the $25,000 Filly and Mare Allowance Hurdle.