WEST FRIENDSHIP, Md.--Sisters, Katharine (Katy) Voss and Elizabeth (Liz) Merryman, both bred horses that raced in the Breeders' Cup at Del Mar, Calif., on Nov. 6, and one, Voss, had a winner in Maryland-bred Aloha West, now owned by Eclipse Thoroughbred Partners. 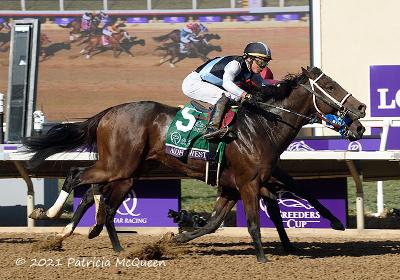 With Knicks Go's win in the Classic, he is the favorite to win the Eclipse Award as Horse of the Year, and that would mean two horses with Maryland connections, a Maryland-bred and a Fair Hill. Md., based steeplechase mare, The Mean Queen, will probably be Eclipse Award winners - great for Maryland racing.

Aloha West, a 4-year-old son of Hard Spun bred by Robert T. Manfuso and Katharine M. Voss and trained by Wayne Catalano, won the G1 $2,000,000 Sprint by a nose in a photo finish.

Merryman bred and raced Caravel as his trainer before selling a majority interest in him to Bobby Flay, who moved the 4-year-old colt to Graham Motion's barn.

Ironically, it was Merryman who was at  Del Mar to see Caravel finish last in the $1 million, G1 Turf Sprint, while her sister Voss watched Aloha West win from her home, Chanceland Farm in West Friendship.

"I HAVE Aloha West's dam and two of her sisters, a yearling and a weanling," said Voss. "I  bought the yearling filly back at the fall sale. Unfortunately, Aloha West was scratched out of a stakes race two days before the sale. The yearling's 3-yesr-old sister , Moquist, is four for four. So I wasn't going to give the yearling away. I only put a reserve of $50,000 on her, but I was only getting bids of $30,000. They were trying to nickle and dime me." 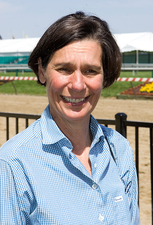 Katharine Voss "I haven't decided what to do with the yearling," said Voss. "I may keep her and race her. Her dam, Island Bound, (by  Speightstown) was a G3 stakes winner. Her pedigree page has gotten very strong."

Voss said that her stable has dwindled as she only has three in training now, but that she usually keeps three of the ones she has bred to add to her stable each year.

"I haven't decided what to do with the weanling," said Voss. I'm going to keep one of them. Maybe I'll keep both."

He never started as either a 2-yar-old or a 3-year-old, winning his first start at Oaklawn Park in a Maiden Special Weight last Feb. 7.

"I don't know why he didn't race until this year," said Voss. "Obviously, he had issues, but whatever they were they don't seem to be bothering him now.

He went on to win three allowance races and place second to Special Reserve on Oct. 8 in the G2 Stoll Keenon Ogden Phoenix Stakes at Keeneland.

In the Breeders’ Cup, he made a big move in the stretch to catch Dr. Schivel and win by a nose.

“That was pretty exciting," said Voss. "I’ve watched every one of his races. When Eclipse bought him, they were very excited. I'm sorry I wasn't there.”

Aloha West now has five wins and two seconds from nine starts with $1,311,068 in earnings.

Voss has been a trainer in Maryland for more than 40 years.

She helped found the MTHA in 1987 and is currently Secretary, as well as a member of the MTHA Purse, Finance and Legislative committees.

She also is a longtime board member and secretary-treasurer of Maryland Million and a former president of the Maryland Horse Breeders Association.

Voss comes from a well-established family of horse people.

Her father, the late John B. Merryman, served on the MTHA Board of Directors, and, with Voss’ late mother Kitty, bred and raced a successful stable for many years.

Voss owns and operates Chanceland Farm, a large breeding, training and rehab facility in Howard County that she developed with Bob Manfuso who passed away earlier in 2020.

Chanceland is also an active consignor at Maryland auctions. 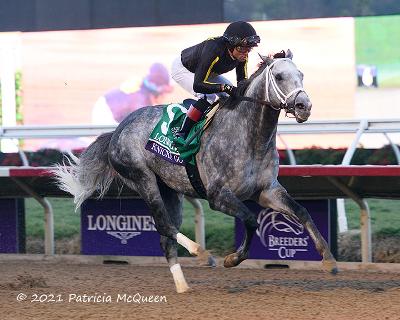 “The track was so fast, I just knew if he broke well it was going to work in his favor. I mean it was his biggest test yet and he obviously passed it with flying colors, it was insane,” said breeder Sabrina Moore. “It was certainly surreal, but I didn’t doubt him. I kind of knew in my gut it would be alright. It’s really wild. I just am so lucky. Being in Maryland, the next best thing you can do, especially to get a kickback for the breeders, is to be in the Breeders’ Cup and for it to work out not just once, but three times, it’s just unreal.”

The 5-year-old son of Paynter, bred by Sabrina Moore and Angie Moore and born at GreenMount Farm in Reisterstown, Md., is the third Maryland-bred to win the Classic and the first in over 25 years, following Concern in 1994 and Cigar in 1995.

He is the second-highest earning Maryland-bred in history behind Cigar ($9,999,815).

He was also second in the 2018 Breeders' Cup Juvenile-G1 when trained by Ben Colebrook.

With three G1 wins this year, Knicks Go appears likely to win the Eclipse Awardas Horse of the Year.

The fourth foal out of Maryland-bred Kosmo’s Buddy, a stakes-winning daughter of Outflanker, Knicks Go was initially sold as a weanling for $40,000 and later purchased by his current connections as a yearling for $87,000 at the 2017 Keeneland September sale.