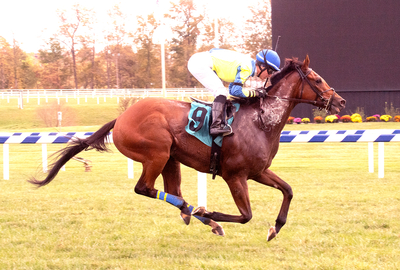 "David Duggan (an Irish-born owner/trainer) claimed Mystical Man at Saratoga." said Fisher. "I bought him from him."

Fisher then ran him in a $53,260 allowance race at Laurel in which Mystical Man ran second.

"We got him to run in steeplechase races," said Fisher. "I'll run him one more time and then turn him out for the winter,"

Welshman had run in the same race in which Mystical Man had been claimed at Saratoga, trained by Barclay Tagg.

Welshman also ran second in another waiver maiden claiming race at Laurel for Fisher 0n Sept. 25. and Fisher said he, too, will be run over fences next year after being turned out for the winter.

HOUGHTON had a winner for Robin H. Perry at Penn National

Witty, out of Zeezee Zoomzoom, by Great Motion, is a half-brother to Caravel, a multiple winner for Merryman who is now trained by Motion and is aimed for the Breeders Cup.