WEST GROVE, Pa.--Leslie Young, whose horses are now stabled in what previously was Jonathan Sheppard's Ashwell Farms in West Grove, Pa., was on an airplane to England just hours after saddling two winners, including one in the $75,000 Timber Stakes, at the International Gold Cup in The Plains, Va., on Saturday, Oct. 23. 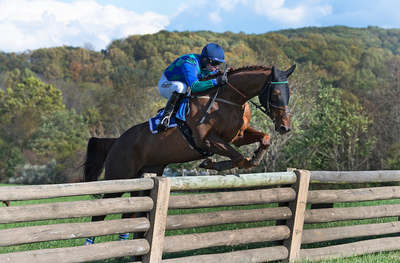 Tomgarrow in International Gold Cup (Photo by Tod Marks)"I flew out of Dulles," said Young. "I came to England to buy some horses. That flight got me here in time to look at a few horses before the sale begins."

Young won both the $30,000 Steeplethon Stakes with Bodes Well (Ire) and the $75,000 International Gold Cup Timber Stakes with Tomgarrow (Ire), both ridden by Tom Garner, who, with three wins on the day, moved into the lead in Riders, Races Won, with 19 wins to Graham Watters' 16 wins.

Leipers Fork Steeplechasers' Tomgarrow won the Timber Stakes by about 50 lengths after his major opponent, Storm Team, trained by Fisher, and Renegade River, trained by Willy Dowling, went off course early in the race.

"THAT WASN'T the first time that happened in this race," said Young. "It happened to us with Andiamo a couple of years ago, It's tricky when you come around the corner there. I feel badly for Storm Team's connections because I've been there. I'm competitive, and it would have been interesting to see how it would have turned out if Storm Team hadn't gone off course."

"It was quite a surprise," said Garner of thepair's leaving the course. "I tried to give them a shout. The sun is in your eyes when you turn there."

With Schoodic having been scratched before the race, that left just four entries, and when two went off course, it left just Tomgarrow and Stand Down, trained by Casey Pinkard Savin and ridden by Eddie Keating, who was quite a few lengths back when the two left the course.

"I shouted back to Eddie to come join me," said Garner.

The two horses jumped head and head until the second to last fence, when Garner started to pull away.

Silverton Hills' Bodes Well won the Steeplethon by 5 1/2 lengths over A Silent Player, trained by Keri Brion, who leads in trainer, Money Won.

"Bodes Well came through the water nicely, and then jumped the next timber fence well," said Young.  "I thought after that that his main worry was Keri's horse."

"He won the Jonathan Kaiser at Saratoga, but we realized then that he was going to struggle in stakes," said Young. "He is a good jumper, so we thought we'd try him in the steeplethon. We took him to Boyd Martin's to gallop through the water there, and we took him to Janice Dugan's to school over fences."

Young had said after tying for the lead in Trainer, Races Won, that she was going to go all out to win.

"It would be such an honor and privileged," said Young. "We'll give it our best try. There are no races next week. Then there's Montpelier and Calloway on Nov. 6. I hope to have a full card of horses for those races. Tom Voss said to me years ago, `If you have the horses that a ready, race them.' We have the horses, and we're going to run them."

"I rode him very patiently," said Galligan. "Last time I rode him, I went to the front too soon, and he got beat. This was my first graded stakes win. It means a lot to me."

Two riders, Stefan Tobin and Teddy Davies, rode their first sanctioned race winners. and were rewarded with the traditional bucket of ice water dumped over their heads.

"My horse pulled me to the front," said Tobin. "I couldn't pull him up after the race. He wanted to go around again."

"I rode point-to-points in Ireland," said Tobin. "There are so many riders there that I couldn't get any rides, so I gave it up for a while, and then I came here."

"I'm feeling great," said Davies. "I wasn't meant to ride this horse. He's a great horse and a lovely jumper."

Davies picked up the ride after Richie Condon was hurt when Undercover Rowdy fell in the second race.

"Contented is a very genuine horse, but he's a bit one paced" said Valentine. "Teddy gave him a very professional ride."

Garner also won the first race on the card, the $25,000 Maiden Hurdle, on Mrs. Johnson's State of Affair, trained by Todd Wyatt.

State of Affair led the whole way to win by 5 1/2 lengths over Ace Ventura, trained by Kathy Neilson.

"I gave him a little breather part way through the race," said Garner. "He's a very clever and precise jumper."

"He'd won a point-to-point in Ireland," said Kingsley. "He's got a lot to learn, but he's talented. I'm thrilled to win with him today."

"It's great to be a part of the game," said Hodsdon. "It's more nerve racking to be a trainer than to be a rider."