The Mean Queen outdueled Snap Decision in another exciting match-up, while Leslie Young went one up in the Trainers race

FAR HILLS, N.J.--Once again, the highly anticipated match, this time a rematch, between The Mean Queen and Snap Decision turned out to be even better than could have been hoped for. 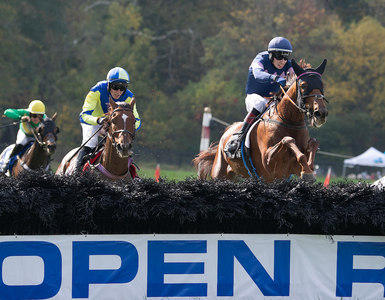 On the final turn of the 2 5/8 mile race, The Mean Queen, ridden by Richie Condon, went to the lead, closely tracked by Snap Decision, ridden by Graham Watters.

The pair dueled through the stretch, but Snap Decision was never able to get past The Mean Queen, who won by a 1//2 length.

The contest between these two is reminiscent of the match-ups between Affirmed and Alydar, and one could wish in both cases that both could win.

"She was amazing, but so was Snap Decision in defeat," said Brion. "Those are two special horses."

"IF NO ONE was going to go to the front, we were going to," said Brion. "Richie makes her look easy to ride. She'll get a well deserved rest, and then she'll get prepped. She'll go to Ireland around the first of the year, have one race in Ireland and then go to Cheltenham."

"Mr. Moorhead (who owns Buttonwood Farm) is in the process of buying s really nice 3-year-old, coming 4-year-old, in Ireland," said Brion. "We may keep him over there, and then we may have two for Cheltenham."

"That was a huge win," said Brion. "These are new owners, all from Ireland, who saw how big the purse money is in America and sent horses over here. I've had this horse about a month. So this was a big win for American racing."

"Parish Delight, who's owned by Paul Willis, was second in the 3-year-old race," said Brion. "Paul Willis is the head of Atlantic Friends Racing, so I was ecstatic for him."

Realist, owned by Ben Griswold, who owns Meadow Run Farm, and trained by Gordon Elliot, won the $30,000 Gladstone Stakes for 3-year-olds by 28 1/2 lengths over Parish Delight.

Both Chosen Mate and Realist will now stay in this country and will be trained by Ricky Hendriks.

That win gave Young a one race lead in Trainers, Race Won, which is still a very tight race, with Jack Fisher, who also won a race at Far Hills, tied for second with Neil Morris with 12 races each, while Brion is third with 11 wins.

"It was very exciting," said Young. "I was very pleased with Presence of Mind. Tom gave him a good ride. He used his stamina. We thought this horse would like this distance. Tom went to the front and then controlled the pace."

Far Hills had six races on the card, all stakes, and all the top horses in steeplechase racing were there.

"Far Hills is very tough," said Young. "You can go there with all guns blazing and still not win a race."

In the final Stakes of the day, Joseph Fowler''s Down Royal, trained by Kate Dalton and ridden by Bernie Dalton, won by 3 1/2 lengths over Speed Alert ,, trained by oug Fout.