MIDDLEBURG, Va.--With two wins on Oct. 9, Leslie Young stayed in the lead in Trainers, Races Won with 12 wins, but she was tied for the lead by Neil Morris who saddled three winners at the Virginia Fall Races, while Jack Fisher looms just one race behind with 11 wins. 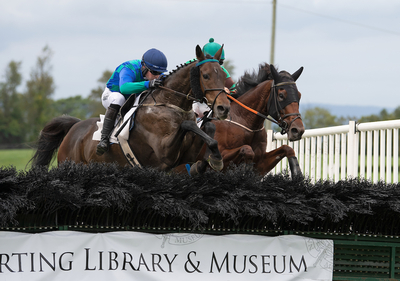 Drewscourt, left, leads Elusive Soul over the last fence in Middleburg (Photo by Tod Marks)Keri Brion, who still leads in Trainer, Money Won, has nine wins and Kathy Neilson, with a win at Genesee Valley, also on Oct. 9, has eight wins.

Neilson's daughter Skylar McKenna had a spectacular day at Genesee Valley, riding the winners of all four races on the card, including Rakhaa (GB) for Young in the $10,000 Apprentice Rider Timber and two for her mother.

Young won one race in Middleburg along with the one with Rakhaa in Genesee Valley.

"I got Drewscourt this summer from Ireland," said Young. "I bought him for Leipers Fork. We had been aiming for this race for a while, so I'm glad it worked out."

"Rakhaa is a lovely horse," said Young. "He's a beautifully bred Shadwell horse. I got him at a 3-year-old at the Doncaster sale. I ran him over hurdles, but he was just too good a jumper for hurdles. We ran him over timber for the first time at Middleburg, but he got a bit of as tendon, so we gave him time off. He could possibly be a Maryland Hunt Cup horse."

"Skylar schooled him once for me, and she rode him well," said Young. "He enjoyed himself in that race. He had his ears pricked the whole way."

Young had four seconds in Middleburg, alson with her winner.

Young also ran three horses in the name of Ashwell Stables at Middleburg, the name under which Jonathan Shepard raced his horses, one of which accounted for one of Young's seconds.

Sheppard retired almost a year ago and has sold most of his horses, but he has one homebred left ,Cup of Aiken, who ran second at Shawan Downs.

"Ashwell Stables now is actually a syndicate," said Young, who has her horses stabled at Sheppard's former training barn in West Grove, Pa. "Jonathan is a shareholder in the syndicate, but we get to run in his colors. It's nice to keep his colors in racing, and Jonathan is enjoying it."

With Far Hills coming up next week and the Gold Cup in two weeks, Young said she is going to pick her spots.

Young has said that she would love to win the Trainer, Races Won title, but she's going to be careful with her entries.

She said she has about seven going to Far Hills. divided between a number of races.

"SKYLAR had the day of a lifetime," said Neilson, who saddled two of her daughter's wins, including Irv Naylor's Withoutmoreado (Ire) in the $10,000 Maiden Timber.

Withoutmoreado won by 40 1/2 lengths in a seven horse race after all but one horse, Shootist,, who finished second, lost riders, fell or pulled up.

Mystic Strike won by a head over Mrs. John R.S. Fisher's Schoodic, trained by Fisher and ridden by Connor Hankin, who had won the race in 2019 and was favored in this year's edition in Genesee.

"Skylar's a cagy rider," said Neilson. "She's smart, and she listens to what the trainers say. She's got an incredible work ethic. She works for Graham Motion in the morning, and then she comes to me and rides for me. She gets on about five a day for Graham and about three a day for me. Then she schools horses in the afternoon for trainers like Ricky Hendriks and Sanna (Neilson, her aunt)."

In the Training Flat, Renown, owned by Atlanta Hall Racing, trained by Elizabeth Voss and ridden by Eddie Keating, won by 1/2 length over Honor Up. trained by Young.