CHARLOTTESVILLE, Va.--Keri Brion, Jack Fisher and Leslie Young are tied in leading Trainer, Races Won, but Fisher only has one entry at Foxfield while Brion has four and Young has five. 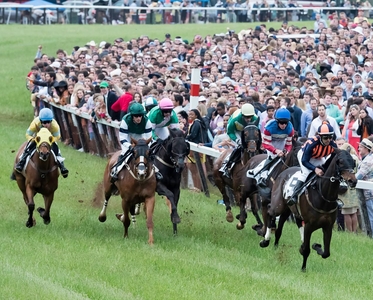 Foxfield Races Foxfield has six races scheduled on Sunday, Oct. 3, beginning st 12:30, but only five are hurdle races counting towards races won, while the second race is a training flat race.

The first race is a $10,000, 2 1/8 mile Maiden Claiming race with seven entries, including one each from Brion and Young.

The fifth race is a$10,000 Apprentice Rider Hurdle with six entries with one entry from Young, and the final race is the $20,000, 2 1/4 mile Ratings Handicap Hurdle with nine entries, with one entry each from Brion, Fisher and Young.

Brion is saddling Atlantic Hill Racing's 4-year-old Peat Moss (Ire), a first time starter in this country who won a handicap earlier this year at Lingfield race course in England.

Fisher has Riverdee Stable's 7-year-old Gostisbehere, who won a maiden claiming race at Charlotte in April and was second in a handicap at Colonial Downs in July.

Young is saddling Ballybristol Farm LLC's Soramond (Ger), another 4-year-old that is making his first start in this country, and he won twice in England earlier this year, winning  a Maiden Weight for Age Hurdle at Southwell race course in May and then a Handicap at Leicester in July.

Foxfield has run spring and fall race meets since 1978, but there was no racing there for the past two years.

The course has be redone and is in the best shape it has ever been.

Foxfield races will be live streamed at the National Steeplechase Association's website.