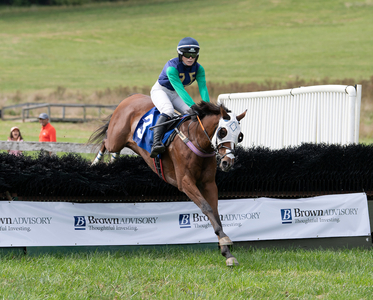 West Newton leading over last fence (Photo by Tod Marks)Jack Fisher and Leslie Young each had one win on the card to move into a tie with Keri Brion for Trainer, Races Won.

West Newton ran in fifth in the six horse field early on, gradually moving up to go into the lead over the last fence and go on to win by 8 1/2 lengths in 3:38 4/5.

West Newton in by Kitten's Joy out of Queens Prize (GB), by Dansili (GB), who stands in England.

He was imported from England in 2019.

"I had a new owner, Patrick Lewis, who wanted a horse," said Hendriks. "We've run him a few times. We ran him in Nashville, because his owner lives there. He won a maiden race st Colonial Downs and finished third in an allowance at Saratoga. He's a high energy horse. He's fun to train. Schyler saved him early in the race. She did a wonderful job on him. It was a very exciting win."

Schoodic, ridden by Connor Hankin,  ran fourth in the five horse race early, flying through the stretch to go on to win by 1 3/4 lengths in 6:56..

"He'll go to Genesee Valley and then to the Gold Cup," said Fisher.

Schoodic won the timber race st Genesee Valley in 2019 and won  the Virginia Gold Cup in May and also has won the International Gold Cup before, finishing first there in 2019.

Fisher said that winning Trainer, Races Won would mean more to him that winning in Money Won, but that the most important thing for him is just to see his horses run well.

He saddled Snap Decision to finish second to The Mean Queen in the G1 Lonesome Glory at Belmont, a much anticipated meeting that turned out to be even more exciting than hoped for when the two horses hooked up as they turned into the stretch.

Both Snap Decision and The Mean Queen are now aimed at another meeting st Far Hills on Oct. 16.

"She's a nice mare," said Fisher. "I'm glad that race (the Lonesome Glory) happened at Belmont because NYRA has been good to steeplechasing. Snap needed that last race. I think he'll be better at Far Hill."

Young said she was "super happy" with Elusive Exclusive's win in the Maiden Timber, and that she's all in for the race to Leading Trainer honors.

"It's so exciting," she said of being tied for the lead. "We're going for it. In 2015, I was second to Jack, and I was third once. We had 14 horses in training in 2015, and we have 25 in training now. Wouldn't winning that title be what we all dream of? It's the greatest honor in training."

Young said that the jockey Jack Doyle, who has been in England since Covid kept riders from returning to the U.. for the season her, had called her to say he thought a horse his sister was riding would make a good timber horse for the Maryland races.

Young said she bought him for Forrest Kelly to ride as an amateur jockey, but that since getting the horse Kelly had married Lia McGurk, and his priorities had changed.

Kelly told her to put a professional rider on Elusive Exclusive, and she put Tom Garner on him for this, his first race in this country, which he won by 3 lengths in 7:06 1/5..

"I think Forrest has gotten offers for the horse," said Young. "But he's let me have some time to try to find a buyer so I can keep him in the barn. I think he'll be a nice Maryland spring horse."

"I'm not sure where he'll go next, maybe Genesee or Middleburg," said Young.

Different trainers won every race at Shawan Downs, with Elizabeth Voss saddling the winner of the first race, a $15,000 Maiden 3-Year-Old Hurdle.

The final two races were 1 mile and 3 furlong Training Flat races, which don't count towards a trainer's winning total, with Janet Elliot saddling Gregory Hawkins' Mekong, ridden by McKenna winning the first by 1 length in 2:34 1/5, with Keri Brion saddling Hudson Hill Farm's Sleight of Hand, ridden by Parker Hendriks, to win the second by  1/2 length in 2:32 3/5.

McKenna was the only jockey to ride more than one winner,