Matz, Hendriks, Motion, and Jenkins have multiple winners while Lopez and Houghton have wins

COATESVILLE, Pa.--Michael Matz of Coatesville had three recent winners, including a Stakes winner, on the track as well as a son and daughter, following in his footsteps, who are winning at horse shows in jumper competitions. 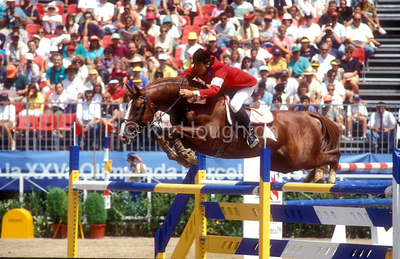 Michael Matz during his jumping careerSon Alex is an up-and-coming professional grand prix jumper rider, and daughter Lucy is a winner in amateur jumpers, most recently at the Devon Fall Classic.

Michael was a top grand prix rider who was a six-time U.S. national champion,winning at least one major show jumping event in 20 consecutive years.

Matz won team gold at the 1986 World Championships in Aachen riding Chef, to go with his individual and team bronze medals that he won at the 1978 World Equestrian Games while riding Jet Run on whom Matz also won the 1981 Show Jumping World Cup.

Matz, after retiring from riding jumpers, turned to training race horses, where he has established himself as a top trainer.

La Babia now has three firsts, three seconds and two thirds from 16 starts and earnings of $139,800.

"I had horses for Michael's mother," said Matz. "Now I have a few for Michael. Dowser won that pretty nicely. She looks like she could go longer. She's by a Md-bred stallion, so she's eligible for the Maryland Million. We'll nominate her for that and take a look at it for her. It's 7/8 of a mile, which might suit her pretty well."

Beacon Hill now has three firsts and a second from six starts and earnings of $94,554.

"He's a nice horse," said Matz. "We'll see if we can maybe find a little stakes for him next."

Most recently he went to Michigan for the Gold Cup, where Alex finished 11th in the Gold Cup after placing second in a big class that morning.

The Gold Cup moved to the Traverse City Horse Show in Michigan after moving first from Devon to Old Salem.

"The Gold Cup doesn't have the following it had when it was at Devon," said Matz. "It's just another jumper class in Michigan."

Matz was also at Lake Placid when Alex won the first of his two Grand Prix wins there and was also at Southampton for Alex's win there.

"It's exciting," said Matz. "But it's a little hard to watch sometimes."

It's often more nerve-racking to watch a competition than to compete in it yourself.

"Alex is starting to get some new owners and some more horses," said Matz. "We bought a nice 8-year-old for him in Europe recently. He should get out of quarantine this week. Alex is getting some nice horses, and he gets to go in the ring more often now. We'll keep our fingers crossed."

"D.D. was at the Devon Fall Classic with Lucy," said Matz. "Lucy has an older horse and a 7-year-old that Alex rode. D.D. bought Alex's share in the horse and he's Lucy's now,"

Lucy was High Junior/Amateur Owner Champion at Devon on her new mount, Jillz. 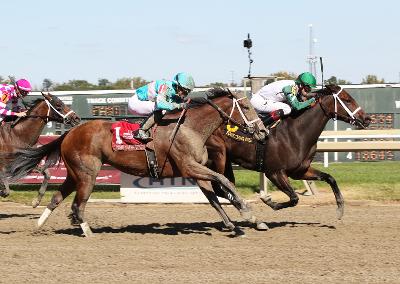 Motion had two winners on Sept. 11.

RODNEY JENKINS won two races, including an allowance, at Laurel on Sept. 16.