ELMONT, N.Y.--Still Having Fun, bred in Maryland by Charles and Cynthia McGinnes and Tim Keefe at Thornmar Farm in Chestertown, profited from a speed duel up front to win the G2, $400,000 Woody Stephens as one of the morning line longshots at 15-1. 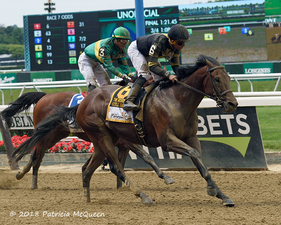 In the G1, $1.5 million Belmont Stakes, Justify led every step of the way to become the 13th winner of racing's Triple Crown.

Still Having Fun, by Old Fashioned out of Casual Kiss, by Dehere, comes from a family that was part of the McGinnes' breeding program right from the start, when they first opened Thornmar over 40 years ago.

"We bred Casual Kiss' grand-dam, Foolish Kisses," said Mrs. McGinnes. "She was bought by Dr. Phillip Torsney, who owned Horatius ( a stallion that stood at Thornmar in the 80s). That's going back 40 years.

"WE BRED BushelandaPeck to Dehere, and that foal was Casual Kiss. We sold Casual Kiss at the Timonium Yearling sale to Tim Keefe, agent, for Arnold Heft. She showed a lot of ability, but she cracked her pelvis coming out of a starting gate before she ever started in a race.

"They gave her a year off to try to get her back to the races, but she wasn't sound," said Mrs. McGinnes. "In his 90s, Heft was in ill health, so Tim asked if we'd take Casual Kiss back as she wasn't saleable because she couldn't race and, because of the cracked pelvis, they weren't sure she could have a foal. So we took her back.

"We had a share in Old Fashioned. He hadn't been that successful as a sire, and they sold him to Korea. But we had one breeding right to him, so we sent Casual Kiss to him just so we wouldn't lose the free season, and that foal was Still Having Fun.

"Now Still Having Fun has won over $400,000." said Mrs. McGinnes. "That shows you should never give up on a good family, and that family goes back 40 years to when we first started Thornmar."

Still Having Fun ran second to last early in the 7 furlong race while Promises Fulfilled blazed through a opening quarter in :21.46 and a half in :43.68, and as they turned into the stretch Still Having Fun moved up to fourth, closed readily and took over in the final 70 yards to  kick clear and win by 1 1/4 lengths over Engage with the second favorite Promises Fulfilled finishing third in the 11 horse field.

Still having Fun has now won four times with two seconds from eight starts and has won $431,703.

SPRING QUALITY, trained by Graham Motion at the Fair Hill, Md., training track, won the $1 million, G1 Manhattan Stakes for 4 year olds and up by a neck over Sadler's Joy, with Hi Happy another neck back.

Eight horses finished across the track six necks and one head apart in a wild finish in the 13 horse field, with the last horse only 3 quarters of a length behind the eighth placed finisher in the  1 1/4 mile race.

By Quality Road out of Spring Star, by Deputy Minister, the 6-year-old gelding Spring Quality has now won six times with three seconds from 11 starts and has won $860,797.

This was his third stakes win but his first G1 stakes win, having won the Robellino Stakes at Penn National on Aug. 5, 2017 and the G3 Red Smith Handicap at Aqueduct on Nov. 11, 2017.

He ran only once as a 2-year-old, winning a Maiden Special Weight at Keeneland on Oct. 24, 2014, and the didn't run again until 2016, when he again ran only once, winning an Allowance Optional Claiming race at Tampa Bay in March before running running seven times last year as a 5-year-old.

Prince Lucky, trained by Todd Pletcher, won the $150,000 Easy Goer Stakes for 3 year olds by a neck over Rugbyman with Dark Valor another nose back in third in the  1 1/16 mile race.

By Corinthian out of Lucky Notion, by Great Notion, Lucky Prince has now won four times with two thirds from eight starts and $231,690.

He broke his maiden in his first race on Aug. 28, 2017 at Delaware Park and won his first stakes race in December at Parx, the Pennsylvania Nursery Stakes.

JUSTIFY WAS never headed in the Belmont, but he may have profited from Noble Indy's breaking badly. 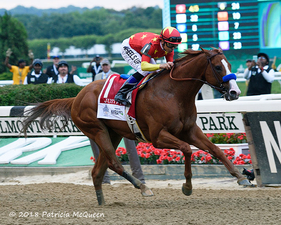 Justify winning the Belmont (Photo by Patricia McQueen)Noble Indy normally would have gone for the lead, and would have done that if he had broken well, and it would have been interesting to have seen the outcome if there had been some pace up front that would have helped some of the closers in the field.

As it was, Justify was able to slow down the pace on the lead and coast on a high cruising speed to an easy victory.

Breaking very fast from the number one post position, Justify flew to an early lead, but Hall of Fame jockey Mike Smith was able to slow things down from there, as Justify clicked off a half-mile in :48.11 and six furlongs in 1:13.21.

But it was a wonderful win for 52-year-old "Big Money Mike" Smith, whose spectacular career was only missing a Triple Crown win until June 9.

He has said when he was inducted into the Hall of Fame that he wasn't sure if he deserved the honor, so NBC commentator Donna Brothers asked him as they rode back to the winner's circle if he felt now that he deserved to be in the Hall, and the answer was a simple, "Yes."

Smith always makes the sign of the cross and looks up to heaven after his wins, and he did so again after his win in the Belmont, perhaps with a little more thankfulness than usual

This horse ran a tremendous race,” Smith said. “He’s so gifted. He’s sent from heaven. He’s just amazing. He was standing so still in the gate, I actually thought, ‘He’s not going to break today.’ I mean, he left there like he was going 440 yards in Ruidoso, New Mexico.”

Actually, all of Justify's connections said a word of thanks to the Lord while in the Winners Circle.

Justify, bred in Kentucky by John D. Gunther, was bought for $500,000 at the Keeneland September yearling sale, and is now owned in partnership by WinStar Farm, China Horse Club, SF Racing LLC, Head of Plains Partners and Starlight Racing and is trained by Hall of Famer Bob Baffert.

“I got very emotional, because I really think I’m getting help upstairs," said Baffert. "I think of my parents, I think of all the good friends I’ve lost, and I know they’re up there. I really believe in that, that they’re helping me out, they’re giving me that little push. I think things happen for a reason. If it was meant to be, it was meant to be. I knew this horse was doing well. We had him ready, but that horse, it was just, just to train a horse like that, he’s just a magnificent animal. I’m just glad that I got a chance to train a horse like that.”

“It was such a blessing, and just thinking about winning the Triple Crown, and it’s just unbelievable,” WinStar’s Kenny Troutt said. “And then seeing him down that stretch, I mean, I was yelling and screaming, I went crazy down that stretch. It was a great blessing.”

China Horse Club’s Teo Ah Khing added, “As I said in the Preakness, the Lord opens the doors, and the doors opened."

Justify's name was immediately added to the 13th plaque in the Belmont in-field honoring the 13 Triple Crown winners.

Baffert joins “Sunny Jim” Fitzsimmons as the only two trainers to have trained two Triple Crown winners, and Baffert now stands alone for the most victories by a trainer in Triple Crown races with 15.

“It’s amazing,” Baffert said. “It never gets old. American Pharoah, he’ll always be my first love. Justify was showing me the same signs, he showed me that same brilliance. Superior horse. I mean, he could have won every race on the undercard today. He’s just that kind of horse.”