The Mean Queen defeats Snap Decision in a much anticipated duel

ELMONT, N.Y--The meeting of The Mean Queen and Snap Decision in the G1. $150,000 Lonesome Glory Steeplechase Stakes was a much anticipated event, with The Mean Queen coming off a G1 victory in the Jonathan Sheppard Stakes at Saratoga and Snap Decision putting a nine race winning streak on the line following a summer off after winning the G1 Iroquois Stakes in July. 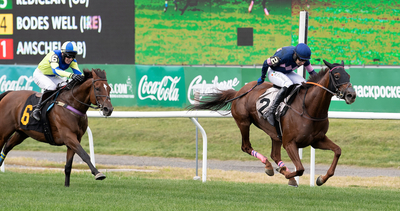 The Mean Queen defeats Snap Decision in the Lonesome Glory (Photo by Tod Marks)And the duel lived up to every expectation.

The Mean Queen got her head in front and then at the sixteenth pole drove clear and went on to win by 2 lengths.

Snap Decision, who was carrying 164 pounds to The Mean Queen's 157, finished second, 9 1/4 lengths in front ot Redicean, trained by Young.

"I IDIDN'T TELL Richard very much," said Brion. "He rides her every day at home, so he knows her well."

“I thought the race would pretty much go exactly like that, but I didn’t know if that would be the outcome,” Brion said. “She’s so tough and I said to Richie, ‘If you can just get her a neck in front of him, that’s our best chance because she’ll never let him pass.’ That’s how she works in the morning. Everything she works with, even if they’re going slow, she’s just like, ‘No. You’re not getting past me.’

“Snap came up to her and she kept that neck around the bend,” said Brion. “I knew at the eighth-pole she wasn’t going to let him get past. She’s just something else.”

"We'll see how she comes out of this," said Brion. "She's still a novice, so she'll go to Far Hills, where she's eligible for the novice, the filly and mare stakes and the Grade 1. After that we'll give her a break."

"At Far Hill the Grade 1 is at even weights, so she'll get the mare's allowance of eight pounds," said Brion. "I'd really like her to get eh Eclipse Award."

Brion said having a horse like The Mean Queen in her first year as a trainer is hard, because it would be hard to ever find another as good.

"She's special," said Brion. "I won't go back to Ireland like I did last winter, but we may send her over there. Maybe aim at Leopardstown in February and then Cheltenham in March."

Brion's huge victory followed a distressing loss of Baltimore Bucko in the William Entemann Novice Stakes, the race that preceded the Lonesome Glory.

Baltimore Bucko fell heavily at the third fence and then collided with Perfect Tapatino, who fell behind him when he had nowhere to go.

Baltimoe Bucko then fell fatally to the ground.

"That was a big blow," said Brion. "It's never easy to lose one, but he was extra special to me. I had picked him out. Bucko was a barn favorite and it is heart breaking to say he is no longer with us. This one will hurt for a long time, as he was the one and only baby Bucko and truly gave his all every time he was on the racecourse."

The Mean Queen has provided Brion with a number of wins, including a victory in April at Ireland’s Wexford Racecourse that made her the first U.S.-based trainer to win an Irish hurdle race.

CONDON was full of praise for The Mean Queen and her formidable foe.

“They are the two best steeplechase horses in America at the moment. The public were really watching this race and the hype between the two horses was really immense,” Condon said. “To get the ride in such a big race against a horse like Snap Decision was just great, and full credit goes to Keri and the mare herself. That was a serious performance.”

Condon said he was a little bit concerned about racing room approaching the stretch run.

"I knew he [Snap Decision] was there, and he made an attempt to keep me in behind Bodes Well,” Condon said. “I made a move sooner than I had planned, but I was delighted to have the rail to guide me to the wire with a top notch animal underneath me.

“That was a proper Grade 1 by American standards,” Condon said. “Snap Decision lost nothing in defeat. I think the two of them are proper Grade 1 horses and they would be able to compete in Grade 1 races in Ireland and England. That’s the caliber of horse they are. America is lucky to have them.”

"He was carrying seven pounds more than her," said Snap Decison's jockey Watters. "Lucky enough at Far Hills, in four weeks’ time, we’ll all go off at level weights. You’d like to think judging off the weights, he’d be able to beat her by open lengths. I thought I was a winner turning in, but the closer we got to the line I could feel that weight getting to me more and more.”

Amschel, Bodes Well, Brianbakescookies and Galway Kid rounding out the order of finish.

Booby Trap led the entire race until the eighth pole but hung on gamely for second.

This was only Ritzy A.P.'s fourth stst over fences after running in stakes on the flat, withhis best finish in a stakes coming in the Lure Stakes at Santa Anita in 2019, when he finished second.

He started over fences this year, winning a maiden special weight at Colonial Downs in July and then finishing fourth in an allowance at Saratoga befoe the Entemann.

Booby trap was coming off a win in an allowance race at Saratoga.