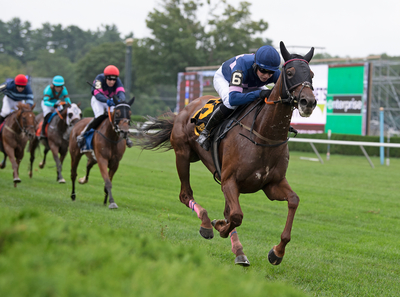 Bruton Street’s Snap Decision is coming off a nine-race win streak dating from 2019 ,and he'll be trying to win his second consecutive G1 stakes after a 3 1/2-length score in the Calvin Houghland Iroquois in June at Percy Warner for Hall of Fame trainer Jack Fisher.

That marked the second consecutive graded stakes win for the 7-year-old Hard Spun gelding, who started this year's campaign with a win in the Gr2 Temple Gwathmey Handicap in May at Glenwood Park.

The 12th running of the Lonesome Glory, race 2 on the nine-race card,has a seven-horse field including The Mean Queen and Galway Kid, trained by Brion, Snap Decision and Brianbakescookies, trained by Fisher, two from Leslie Young, Bodes Well and Redicean, and Amschel from Cyril Murphy.

The Mean Queen began her career with Brion with a win last April at Ireland’s Wexford Racecourse that made Brion the first U.S.-based trainer to win an Irish hurdle race. In just her third start overall and first over jumps, and then the 5-year-old mare won her first two starts in North America.

The Mean Queen was leading by about 6 lengths in the Jonathan Kiser Novice on July 28 when she ducked away from the whip and then back in from a pylon, unseating Thomas Garner.

“IT'S CRAZY to say, but she actually gets better after every race,” Brion said. “She’s doing the best now since I’ve had her. I’m really looking forward to it. This will probably be her toughest test. To be honest, I don’t know how good she is. Everyone she works with in the morning, she just toys with. She’s toyed with every field she’s been against so far, but this is how we find out.”

Brion, who was Sheppard's assistant trainer before going out on her on when he retired, trained the top three in the Jonathan Sheppard, with Baltimore Bucko holding off French Light for second.

Bucko and French Light are both running in Thursday's first race, the $75,000 William Entemann Memorial.

“She’s really special,” Brion said. “I know it’s early in my training career, but I’m not sure if I’ll ever train a horse like her again. I worked for Jonathan for 11 years and no one he trained in that time compared to her. I don’t know exactly how good she is, but I’m just really fortunate to get the opportunity to train her. She’s different.”

Richard Condon will pick up the mount on The Mean Queen from Garner, who will be on Bodes Well for Young.

The Mean Queen will carryi 157 pounds, while Snap Decision will carry 164 pounds and will be ridden by Graham Watters..

Brion will also send out Hudson River Farms’ Galway Kid, who will be running in his third straight G1 appearance after being eased in the Iroquois on June 26 at Prairie Meadows and finishing fifth last out in the A.P. Smithwick Memorial at Saratoga.

“He was actually very sick coming out of his race in the A.P. Smithwick," said Brion. "He had a bad infection deep down in his lungs, and that’s why he missed the Jonathan Sheppard. I was really happy with him going into the Smithwick. I do expect him to run a really good race. But he hasn’t run in a little while and we’re using this more as a race for him and then go on to Far Hills, which is more suitable to his running type and style.

Parker Hendricks will ride Galway Kid, who will carry 146 pounds.

“I could see him getting a piece of it and he’s in at a nice, light weight,” Brion said. “He’ll love the distance; the two and a half. I’m happy with him and I think he’ll run a really good race.”

Snap Decision, the highweight, is 9-2-0 in 11 career starts over jumps.

Previously trained by Hall of Famer Shug McGaughey at the start of his career for flat racing, Snap Decision finished second in his first two races over hurdles before going on his winning streak.

“The Mean Queen is obviously going in against Snap Decision, who is a great horse, and it’s the first time she’s really been tested like that,” Brion said.

Silverton Hill’s Bodes Well, who won the Jonathan Kiser after The Mean Queen lost her rider, had consecutive third-place finishes in handicaps before winning the Kiser, his first North American stakes win.

Young will also saddle Sharon Sheppard’s Redicean, in at 148 pounds, who will be looking for his first win since the 2019 Jonathan Kiser.

Redicean, fourth in the A.P. Smithwick and seventh in this Jonathan Sheppard, will be ridden by Gerard Galligan.

Irvin Naylor’s Amschel, who ran third in the G2 Temple Gwathmey before running second in the G1 Iroquois, will be ridden by Barry Foley and carry 150 pounds.

Brianbakescookies will be ridden by Skylar McKenna and will carry 144 pounds.

Young and Brion will saddle six of the seven starters, and Brion saddles a strong group in this race, too, with Baltimore Bucko, French Light and A Silent Player.

Buttonwood Farm’s Baltimore Bucko won the G1 A.P. Smithwick at Saratoga in July, and finished second, beaten 4 3/4 lengths, to The Mean Queen in the Jonathan Sheppard.

Irv Naylor’s French Light was third in the Sheppard after running second in the Smithwick.

A Silent Player. finished off the board in the Sheppard and in the Kiser.

Young will saddle Van Cushny and Tom Rice’s Booby Trap, who won at Colonial in July and then won an allowance race at Saratoga on Sept. 1.

Young will also saddle Leipers Fork Steeplechasers’ Perfect Tapatino, who was beaten just over a length by his stablemate Bodes Well in the Kiser.

Young’s third entry is  Bruton Street-US’ Bassmatchi, who has one steeplechase win and will be ridden by Garner,

Neil Morris will sadle Bryce Lingo and Leslie Kopp’s Ritzy A.P., who won a maiden race at Colonial in July, and then finished fourth in an allowance at Saratoga on Aug. 4.

Both races can be seen live on America’s Day at the Races, which will also stream live on the NSA website.