SARATOGA SPRINGS, N.Y.--Leslie Young saddled Booby Trap and Perfect Tapatino (Fr) to finish first and second in Saratoga's final steeplechase of the year, moving her into a tie for Trainer, Races Won with Keri Brion and Jack Fisher. 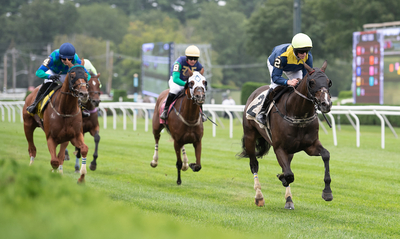 Booby Trap leads Perfect Tapatino and West Newton to the wire at Saratoga (Photo by Tod Marks)Booby Trap, owned by Van Cushny and Thomas Rice, trained by Young and ridden by Gerard Galligan, won the $65,000, 2 3/8 miles Allowance Steeplechase at Saratogs on Aug. 29.

Booby Trap was bumped and forced out at the start, resulting in his jumping the first fence poorly, but he recovered nicely, made an inside bid on the last time around the clubhouse turn, opened up a sizeable lead around the final turn and was eased at the wire to win by 1 1/4 lengths over Leipers Fork Steeplechasers' Perfect Tapatino, ridden by Tom Garner, with Uplands Flat Racing and John Lewis' West Newton (GB),, trained by Ricky Hendriks and ridden by Parker Hendriks, third, another 2 1/2 lengths back.

"That was quite something," said Cushny. "All these years, my horses have been second so many times but never have won. This is hard to believe, It's like a dream come true."

YOUNG HAD seen Booby Trap and liked him and had persuaded Cushny and Rice to go in halves on the horse, although they didn't know each other. 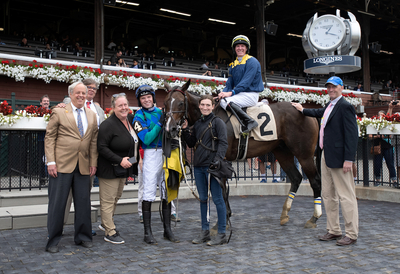 Left to right, Van Cushny, Tom Rice (in back), Leslie Young, Tom Garner (at horse's head), Booby Trap with Gerard Galligan up, and Paddy Young (Photo by Tod Marks)Finally at Saratoga, Cushny and Rice got to meet each other and celebrate.

"We drank champagne in the Trustees' Room," said Cushny. "It was the group from Oxmoor Steeplechase, who had sponsored the race, and Leslie, Paddy (Young), Tom and me. It was great."

"Booby Trap seemed fine after the race," said Young. "Hopefully, we can bounce back and go to Belmont."

Young is thinking about putting Booby Trap in the Lonesome Glory.

"If you're going to take on the big boys, the time to do it is when you have a weight break," said Young.

"This win was so great for the owners," said Young. "Van was so happy that he took us all to lunch at the Reading Rooms, and for Mr. Rice, he's just returning to the sport, so it was fantastic for him to win."

"We're restocking," said Young. "We just bought another two from England. We'll have 10 or 11 new horses for the fall circuit. We're excited. "We have some great horses and some great owners."