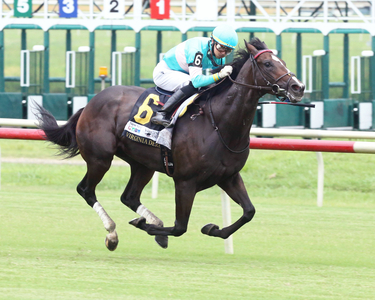 Wootton Asset (Photo by Coady Photography)Wootton Asset.owned by Madaket Stables LLC, won the G3,  $250,000, 1 1/8 mile Virginia Derby for 3-year-olds on the outer turf by 3/4 lengths over Slicked Back, but there was a nervous waiting period before the results became official after the second placed jockey, Fernando De La Cruz,claimed foul against Jose Ortiz, Wootton Asset's rider.

A rerun of the race showed no foul had occurred, and the result finally became official.

"I don't know what that was about," said Motion. "But Jose was really confident that he hadn't done anything wrong. Wootton Asset won very decisively."

"I'd like to run him against 3-year-olds one more time, possibly at Keeneland," said Motion. "I'll run him only one or two more times this year and then give him some time off. I think he'll be a fun horse to have next year." 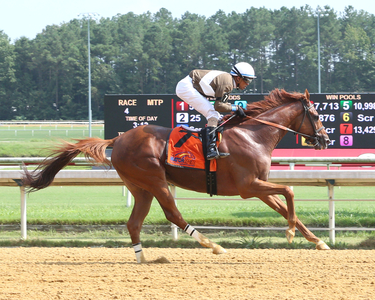 Tuned is by Toronado out of Zagora, by Green Tune.

"We always though Tuned had stakes potential," said Motion. "She's been knocking on the door. Her last two races have been her best. I have a feeling that she appreciated the hard ground, which is what she got at Colonial Downs. She'll be retired as a broodmare at the end of the year."

"It was a great day," said Motion of the pair of stakes win.

English Bee vied for the lead on the backstretch, battled through the stretch and won by a head.

Chulainn was five wide on the turn and closed fast to win by 2 1/2 lengths.

"We bought him as a yearling," said Jenkins, who bid him in for Hilllwood Stable for $150,000. "The older he gets, the better he gets. He's a nice mannered horse. He's easy to do things with."

Jenkins, who has 19 horses in training, said that there are a number of Maryland-bred races coming up that Cordmaker might run in.

BERNIE HOUGHTON had a winner for Robin Perry at Penn National on Aug. 18.