KENT, Va.--Compass Zone, trained and ridden by Sean McDermott, ran first or second throughout the $30,000, 2 mile Maiden Special Weight steeplechase at Colonial Downs on Aug. 30 and stretched out through the stretch to win by 2 lengths. 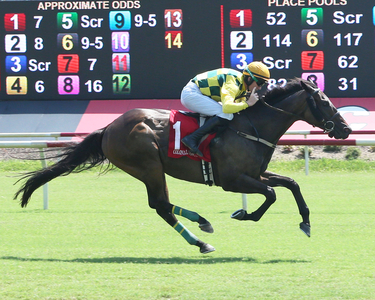 Compass Zone at the finish (Photo by Coady Photography)Owned by South Branch Equine LLC, Compass Zone vied with second placed Ballybristol Farm LLC's The Flasche, trained by Leslie Young and ridden by Tom Garner, throughout the race and held him off in the stretch, while Buttonwood Farm's Lizzy, trained by Keri Brion and ridden by Richard Condon finished third, another 3/4 lengths back.

"I got Compass Point a year ago March, right around the time Covid stopped everything," said McDermott. "He was worse for the wear, but we gave him a little TLC and some time, but it was hard to get him back to form."

"This year, he's run second twice and then was third at the Gold Cup," "I gave him a little holiday, and then he got a stone bruise, so he came into this race a little light."

McDERMOTT said he has 10 horses in training at Maple Spring Farm in Monkton, Md., plus one or two that he's let down for a while. 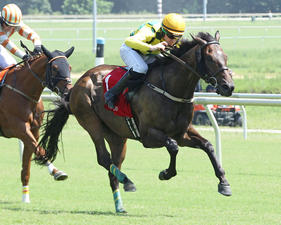 Compass Zone draws away from The Flasche (Photo by Coady Photography)He said Compass Zone is the oldest horse he has, and that most are 2-year-olds.

"The majority come to us unbroken, so we have to do it all from scratch," said McDermott.

McDermott has been training for two years now and has had 10 horses finish in the money from 25 starters.

"Compass Zone ran before on the flat, and we don't want to go down that road again," said McDermott. "We'll maybe run him back in about four weeks in a never won two or wait until Middleburg. I don't want to over-race him. He's a kind old soul."

Choo Choo settled in third throughout the race, taking the lead at the top of the stretch and opening up for the win,