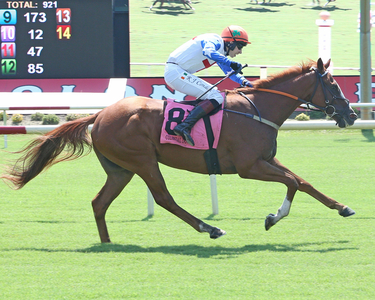 Howya Tuppence at the finish (Photo by Coady Photography)The win tied Brion with Jack Fisher in Trainer, Races Won, with eight apiece, while she continues to lead in Trainer, Money Won.

"I got Howya Tupppence last March in Ireland from Harley Dunne to bring back to the States," said Brion. "He had run in a 3 mile point-to-point in Ireland and hadn't finished. We thought he'd do better in this country. He wasn't very expensive, so I put it out on twitter, asking if anyone was interested in buying a piece of him. I got a huge response. He's now owned by a syndicate of 30 people from England, Ireland, France and Canada. None of them have been able to come to this country to watch him race because of Covid restrictions, but they all have hopes of coming."

"FRONT RUNNERS have been winning at Colonial Downs, but once Howya Tuppence got in the vicinity of the lead horse he was quite game," said Brion. 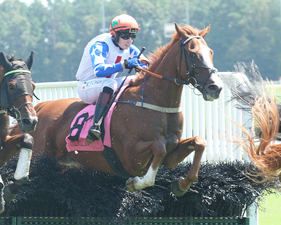 Howya Tuppence (Photo by Coady Photography)"This was a really hard race for him, so we'll see how he pulls up after this," said Brion, who said she wasn't sure where Howya Tuppence would run next.

But she did say it wouldn't be at Saratoga, saying she had no more entries for Saratoga races.

After winning the two G1 steeplechases in Saratoga, Brion said that was a good way to end it there.

Flying Elvis Stable's Vincent Van Gogo, trained by Neil Morris and ridden  by Galligan, won the second steeplechase of the day, a $20,000 Handicap.

Vincent Van Gogo ran fourth or fifth in the nine horse field, gained steadily through the stretch and just got up to win by a neck over Port Laifge Stables and Hollywoo Stable's Decisive Triumph, trained by Mark Beecher and ridden by Jamie Bargary, with Melissa Cantacuzene's Yanj\kee Doodle Boy, trained by Paul Fout and ridden by barry Flooey, finishing another 6 lengths back in third.