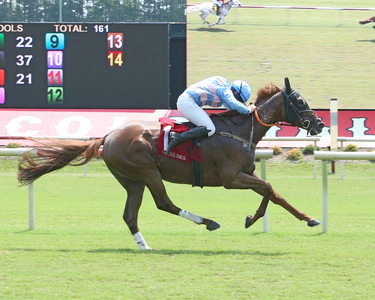 Screen Image winning The Randolph D Rouse (Photo by Colonial Downs Photographer)Boss Man led all the way and won by 2 1/1 lengths over Court Ruler, trained by Leslie Young and ridden by Tom Garner.

"I bought Boss Man from Jason Servis," said Kingsley. "Bill Price wanted me to find me a nice horse, and Boss Man, who was 8, was right in my backyard, and he'd been talking to me every time he ran. He'd run well every time, but then he got beat, and they dropped him in for a $16,000 price. So I called Servis and bought him."

We ran him at Tryon and then at Bill's race meet, the Charlotte Steeplechase, he won the maiden special weight," said Kingsley. "He won an allowance at Saratoga, ran third in the novice stakes there and then won the Wiliiam Entemann Stakes at Belmont. That was all in 2018."

Kingsley said Boss Man then went through a bad stretch, slipping in form and getting hurt in 2019, and he only an once in 2020, and then in a maiden timber race.

In 2021, Boss Man was back to hurdles, was fourth at Willowdale and fourth at Iroquois, where he was constantly bothered by a loose horse.

"WE WERE biding our time, and we finally got him in the right group of horses," said Kingsley. "Jamie got him in a nice rhythm, and he led all the way and won."

"But it was bittersweet a few days later when the handicapper took away any future races for him," said Kinsley. "He was put in at a 116 rating, so now there's nowhere to run him. We put three years into him, and now no where to go. It was only a six horse field at Colonial, and without him there'll be only five next time.

Kingsley said the current way of rating horses is taking horses out of races.

"Boss Man has been so loyal, so honest," said Kingsley. "He's been so steadfast in his role as one of my color bearers."

GREGORY has only the one horse both as owner and trainer, and this was Screen Image's fourth race for Gregory and fourth as a steeplechase horse. 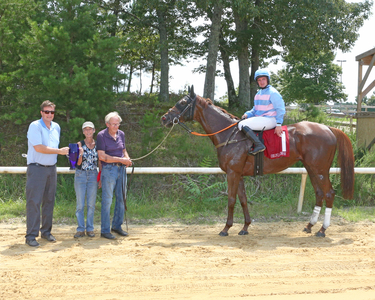 Screen Image with Gregory holding the shank (Photo by Colonial Downs photographer)Screen Image won his first time over fences, at Foxfield in last October, then was third in a handicap at Charlotte last April and fifth in a stakes at Iroquois before winning at Colonial Downs.

Screen Image was always close to the pace, went to the leas in the stretch and was ridden out to win by 4 1/4 lengths over Joseph Fowler's Down Royal, trained by Kate Dalton and ridden by Bernie Dalton, with Buttonwood Farm's Lizzy (Fr), trained by Keri Brion and ridden by Richard Condon third.

Although Gregory now has only one horse in training, he apparently trained horses back in the '70s before he was tried for killing his estranged wife and her lover after discovering them in a cottage in Middleburg, Va.

In a 1982 article in the Washington Post, "Theodore C. Gregory, a Loudoun County horse trainer, was gripped by an irresistable impulse and was temporarily insane when he shot his wife's lover to death in August 1980, defense lawyers argued today as Gregory's first-degree murder trial opened here.

Gregory, 31, was convicted two years ago of trying to murder his wife, Monique, on the same night LaBove was killed. A retrial ended in acquittal."

According to a post this year by "My life of Crime, in the trial for killing LaBove, "Theodore Gregory was convicted of voluntary manslaughter and fined $1,000 for taking the life of another human being."