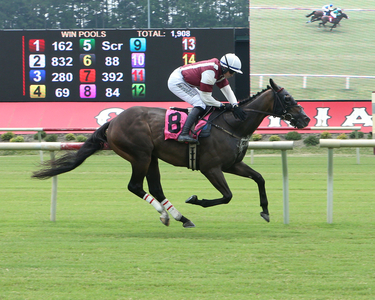 Booby Trap winning at Colonial Downs (Photo by Coady Photography)"Tom said he just popped him out of there, sat handily on him and won nicely," said Young, who missed the race because it wasn't televised by Colonial Downs and was missed by National Steeplechasing's live stream.

The two steeplechase races, although run as the first and second races on the day, are listed as the 10th and 11th races and are run as non-betting races.

"I love this horse's breeding," said Young. "He's by Hard Spun out of a Kitten's Joy mare. "I'd seen him run a couple of times. He was running at Charlestown. Then I saw that a friend of mine, Diana McClure, had claimed him, and I bought him from her and then sold him to Van and Tom. I don't think they even know each other."

"WE GAVE him time," said Young. "We ran him in a flat race at Winterthur. We didn't rush him. We took him to Tryon, but the ground was too soft for him. We were pleasantly surprised today. If he comes out of this race okay, we might send him to Saratoga towards the end of the meet for a non-winners race."

Kinross Corporation's Junonia, trained by Neil Morris and ridden by Harrison Beswick, won the $20,000 Handicap, the second steeplechase of the day, by 2 3/4 lengths over Riverdee Stable's Gostisbehere, ridden by Watters and trained by Fisher, with Sanna Neilson and John Huganir's He'll Do, trained by Sanna and ridden by her son Parker Hendriks, placing third.