SARATOGA SPRINGS, N.Y.--Liz Merryman's homebred Caravel won her first stakes in the G3, $200,000 Caress Stakes for older fillies and mares at 5 ½ furlongs over Saratoga's Mellon turf course, but it was last race for her owner to train her. 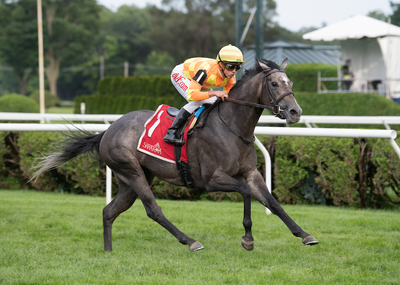 Caravel wins the Caress  Stakes (Photo by Tod Marks)Merryman sold 75 percent of Caravel to Bobby Flay prior to the Caress, and the 4-year-old filly will be trained by Graham Motion from now on.

"It was really hard to sell her, but sometimes you have to make a good business decision," said Merryman. "We'll see in the future if it was a good decision."

Merryman has four half siblings of Caravel's, and still owns her dam, who is now in foal to Street Boss, and Merryman said that part of the reason for selling Caravel was to support the rest of her homebreds that she keeps on her farm in Coatesville.

Merryman said she had tried to breed her dam, Zeezee Zoomzoom, back to Mizzen Mast, Caravel's sire, but he wasn't getting his mares in foal."

"CARAVEL came into the race in good form," said Merryman. "I didn't think it was all that tough a race. I had watched a lot of videos of Robin Sparkles, (a pre-race second favorite who ended up third) and I thought Caravel could win."

Caravel was third turning into the stretch and then just switched gears and shot to the front in a couple of strides to win by 2 1/2 lengths over Good Spirits..

"She's fast," said Merryman. "She moved into Graham's barn at Saratoga after the race. She can't go back to Fair Hill yet because of the quarantine. But Graham's barn is next to mine at Fair Hill, so I'll see a lot of her."

Never out of the money in nine starts, Caravel boasts a record of 7-0-2.

The Caress marked a fifth stakes triumph for the Pennsylvania-bred filly, who won the Lady Erie and Malvern Rose over the all-weather surface at Presque Isle Downs during last year’s sophomore campaign.

The triumph also marked a first graded stakes win for Merryman, who praised Ortiz, Jr. for piloting Caravel with excellence.

“I don’t know if she’s improved, but I think people understand how she needs to be ridden, and the trip is better now,” Merryman said. “I said to Irad just be as quiet as you can leaving the gate because the least twitch of the reins and she’s going. It’s pretty amazing. You watch Saratoga and just think it’s the place to be. To come up here with a filly like that, it’s amazing.”

Ortiz, Jr. said he wanted to replicate his filly’s previous trip in the last out Goldwood.

“The whole turn, she was on the bridle waiting for the time to go,” said Ortiz, Jr., who earned his third stakes win of the Saratoga meet. “I wanted to make sure to go around the horses like she did last time at Monmouth. I was able to get in the clear and as soon as I asked, she gave me a really good kick – a good turn-of-foot.”

Motion has his eyes set on the G1, $1 million Breeders’ Cup Turf Sprint on Nov. 6 at Del Mar.

“We’ve talked for weeks about her. He’s watched her train pretty much every day,” Merryman said. “He’s just been so nice and classy and sweet about her. He was very much laying low today, but we talked a lot about her and we’ll continue to talk about her.

The same day, Flyingonthe ground, owned by Ellendale Raceing and trained by Merryman, placed second by 1 3/4 length in the $100,000 Sensible Lady Turf Dash at 5 furlongs at Pimlico.

"She's also by Mizzen Mast," said Merryman. "She's a homebred of a good friend of mine. She's consistent and hard knocking. We wanted to get some black type on her."

On July 21,, Merryman also saddled Ellendale's homebred mare Touch Me Not to win a $20,000 Claiming race at Parx, but Touch Me Not was claimed by trainer Jorge Diaz.

MOTION saddled Skeedattle's Sweet Talking Girl to win a $30,750, 1 mile Claiming race for older fillies and mares on the turf at Pimlico by a head, and on July 2 his tranee Grandeur, owned by Koayashi Eiichi Holdings LLC, won a $38,000, 6 furlong Maiden Special Weight at Delaware Park by 2 1/4 lengths.

BERNIE HOUGHTON claimed back a homebred of Barlar, LLC,, that won a $17,000 Maiden Claiming race at Penn National on July 13.