NEW KENT, Va.--Forgiving surged to the lead in the stretch and drew away to win the 3 lengths in the $30,000 Maiden Fillies and Mares steeplechase at Colonial Downs on July 19. 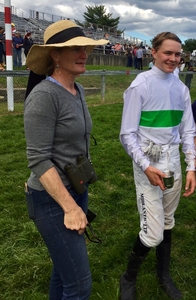 "Sherry and Jonathan owned Forgiving together, and when Jonathan retired Sherry asked me to take her," said Neilson. "I've had her since last January."

"We ran her at a point-to-point, just so Parker could get a feel for her, and then we ran her at Radnor, but she didn't like that track," said Neilson. "She's a pretty opinionated mare. She's a bit quirky. We ran her in the Gold Cup, and that track has a long stretch. She was a quick closing third. I was really happy with that race."

"She's a  big, strong mare," said Neilson. "There's nothing delicate about her. She has a huge shoulder and a big hind end. There's a filly and mare stakes race at Colonial in a couple of weeks. but she's eligible for a Ratings 110, so maybe we'll try her in that."

Ritzy A.P. settled in the rear of the 2 mile steeplechase, and surged through on the rail to go on to win over Port Lairge Stables' Quality Choice, trained by Mark Beecher and ridden by Graham Watters.

Howya Tuppence, owned by The International Venture and trained by Keri Brion placed third but was disqualified ,and Ballybristol Farm's Cause for Pardon, trained by Leslie Young, was moved up to third.