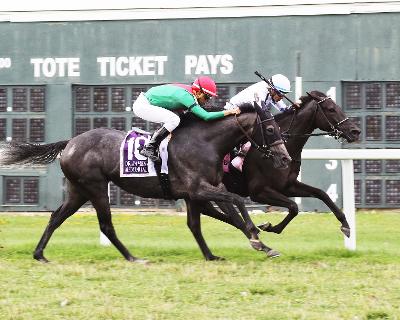 Princess Grace settled fourth inside in the seven horse race, found an opening entering the stretch and won after a long drive.

The 4-year-old filly has now won four times with one second from five starts and has earnings of $320,460.

GRAHAM MOTION saddled three winners. all at Belmont Park, during the past 10 days,

The 4-year-old colt ran last of six early in the race, went four wide into the stretch and went on to win by 1/2 length.

Jarreau saved ground while under a snug hold, was blocked from the quarter pole to the eighth pole and then closed fast to finish second before the disqualification made him a winner,.

Eclipse Thoroughbred partners' Sister Otoole won a $92,000, 1 1/4 mile Allowance race, another on the turf, by 1 length.

Sister Otoole tracked the pace early and inched away in the stretch for the win.

BERNIE HOUGHTON had two winners, one of which was bred by his mother Btesy at her Sylmar Farm in Christiana, Pa.

Never far back, Witch swung out entering the stretch and quickly drew away for the win.

Brazilian Bay raced two wide and held on after a stiff drive to win by 1/2 lenth,