Mrs. Orb and Yaupon each won a Match Series race at Pimlico, while Trolley Ride, trained by Bernie Haughton, ran second in the Filly and Mare race

BALTIMORE, Md.--Mrs. Orb and Yaupon took their respective Mid-Atlantic Thoroughbred Championships Series (MATCH) stakes July 4 at Pimlico Race Course, and the usually contentious 3-Year-Olds and Up Sprint—Dirt division is again shaping up as one to watch. 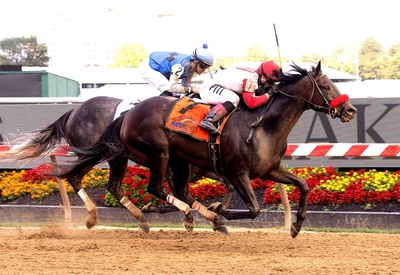 Mrs. Orb holds off Trolley Ride in the MATCH race at PimlicoMrs. Orb, a New York-bred owned by Ruggeri Stable, Richard Coburn, Script R Farm and trainer Mike Miceli, went over the $500,000 mark in earnings in the 1 1/16-mile Caesar’s Wish, the second of six legs in the Filly and Mare Long—Dirt division.

Despite Trolley Ride's finishing just 1//2 length behind Mrs. Orb, Houghton said he wasn't sure she'd run in another of the MATCH races.

"It wasn't my intent to run in the MATCH series," said Houghton. "This race just came up at the right time. Trolley Ride is going next to the Princess of Sylmar Stakes at Presque Isle the last week in July."

Princess of Sylmar  was named after Houghton's mother's farm, Sylmar, and she was foaled there and was trained by Houghton throughout her career.

"I THOUGHT Trolley Ride ran an excellent race," said Houghton. "I haven't rule out running her in another of the series."

Ridden by Horacio Karamanos, who also rode Laki, Mrs. Orb rated in fourth through quick fractions before taking over in mid-stretch and holding off a late rally by Trolley Ride.

Mrs. Orb, a 6-year-old mare by Orb, has been a fixture in New York-bred stakes company but last November was second in a G3 stakes at Aqueduct Racetrack.

“She’s a tough gal—she’s not easy to train, but you don’t mind when they can run,” Miceli said. “She’s a little temperamental. You pretty much have to cater to her.”

Mrs. Orb, a slight favorite, paid $6.20 to win and covered the distance in 1:44.17 on a track rated fast. She collected 10 MATCH Series points to tie Spice Is Nice at the top of the division.

In the $100,000 Lite the Fuse Stakes, the second of six legs in the 3-Year-Olds and Up Sprint—Dirt division this year, Yaupon, owned by Bill and Corinne Heiligbrodt, got back on the winning track after eighth-place finishes in the GI Breeders’ Cup Sprint in November 2020 and the Group I Dubai Golden Shaheen in March.

The 4-year-old Kentucky-bred by Uncle Mo had been training this spring at Churchill Downs and previously had won his first four races, including the G3 Chick Lang Stakes at Pimlico in October 2020.

With Ricardo Santana Jr. riding for trainer Steve Asmussen, Yaupon stalked front-running Chateau for about a half-mile before taking over in upper stretch in the six-furlong event.

He gradually pulled away to win by 1 3/4 lengths over Laki, who bid between those two on the far turn and ran on well for second while Chateau was third.

”He broke really sharp,” said Santana, who rode Yaupon for the first time. “He came in the race from the layoff and I wanted to give him a little break. He put me in a good position, so I let him take a second deep breath and at the three-eighths pole when my horse felt the other horse, he took off back.”

The other horse was Laki, who rated in third early and made his bid on the far turn.

Laki, owned by Hillside Equestrian Meadows and trained by Damon Dilodovico, finished fifth in the G3 Maryland Sprint Stakes—the first race in the division—but rebounded nicely in the Lite the Fuse.

“He ran really well,” Dilovodico said. “I thought he may be able to get outside down the backstretch because it looked like Yaupon (wasn’t gaining on the leader). But there’s no shame in running second to him. We’re really blessed to have this horse.”

Yaupon and Special Reserve, winner of the Maryland Sprint, each have 10 points to top the division. Maryland-bred Laki now has 9 points thanks to having started in both stakes in the division thus far.

Undefeated Chub Wagon, owned by George Chestnut and Daniel Lopez, leads the Filly and Mare Sprint—Dirt division and the overall series with 20 points.