Snap Decision wins ninth in a row at Iroquois in 100,000 Stakes

NASHVILLE, Tenn.--Snap Decision won the first G1 steeplechase of the year, the $100,000, 2 3//4 mile Calvin Houghland Stakes at Iroquois Steeplechase on June 26 for his ninth straight win, to equal the record of consecutive races won by one horse. 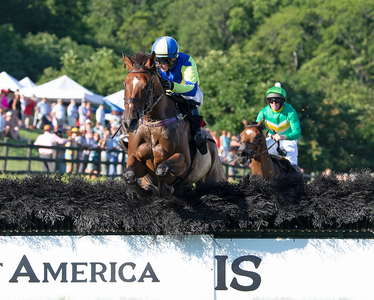 Snap Decision leads over the last fence in the Iroquois Stakes (Photo by Tod Marks)Owned by Bruton Street-US, trained by Jack Fisher and ridden by Graham Watters, Snap Decision basically played with the six horse field, galloping easily behind New Member, also trained by Fisher, before going to the lead at the last turn and finishing in hand after a 3 1/3 length victory.

"He was really geared down going to the last fence, just to make sure he jumped it okay," said Fisher, whose third entry, Footpad, owned by Harold Via, fell early in the race.

Thrice Worthy, owned by W.S. Farish III, trained by Jonathan Sheppard and ridden by Jerry Fishback, although he was never a champion, won nine consecutive races from a maiden race at Atlanta on April 4, 1981 through the Hard Scuffle Steeplechase on May 22, 1982, a series of races that included three handicaps and two stakes.

But there's good news for all the other steeplechase trainers - Snap Decision isn't going to Saratoga for the two G1 races there.

Both the G1 A.P. Smithwick and the G1 New York Turf Writer's are handicaps, with the handicapper assigning weights to make the fields as equal as possible.

"SNAP DECISION won't go to Saratoga because he'll be crushed by the weight there," said Fisher. "I didn't send Good Night Shirt to Saratoga for the same reason. I remember Saluter almost being beaten by a point-to-point winner because he was giving him 30 pounds."

Snap Decision will be turned out for the summer and will return for Far Hills in the fall.

"It's nice to train a horse like Snap Decision," said Fisher.

Fisher also saddled Sheila Williams' Storm Team, ridden by Watters, to lead all the way in the $20,000, 3 mile Allowance Timber race to win by 3 lengths over Leipers Fork Steeplechasers' Tomgarrow, with Ballybristol Farm's Rakhaa third, both trained by Leslie Young.

While Storm Team never hit a fence, the rest of the field decimated the fences, so by the third circuit there was almost nothing left to jump.

The consensus is that timber racing has become a farce, with too many fences coming down on the first circuit, leaving nothing for horses to jump.

The timber fences as they are currently made are too difficult to repair for them to be replaced before the horses come around again.

Fisher said that he is working on making a timber fence with rails on hinges or fences with frangible pins.

He said he also had fences with eight inch round poles that would cause a horse to stumble enough to dislodge his rider but at the same time not cause a broken leg.

Storm Team will also be turned out until the fall races.

"It was a very exciting day," said Brion.

"She's a really special horse," said Brion. "I'm lucky I get to train a horse like her."

The Mean Queen's first win for Brion was in Ireland, making history for Brion as the first American trainer to saddle an Irish winner.

"Someone asked my why I though The Mean Queen was going to win that race in Ireland, said Buttonwood owner Rod Moorhead. "I said, `I have a trainer who's under 30, a good Irish jockey and a horse name The Mean Queen. Why wouldn't you think you were going to win?'"

"For The Mean Queen, there's a $75,000 stake at Colonial in early August against the girls." said Brion. "If that goes well, we may take a shot at Saratoga against the boys."

"Meanwhile, there's two flat races for horse that have won over fences at the new Fair Hill track on July 7," said Brion. "There used to be a flat race horse jumpers at Parx, but they didn't want to do it this year with Covid, so Fair Hill stepped up."

"I did not expect that," said Brion. "The race just set up for him. Dan Nevin on my other horse, Nice to Meet Ya (Ire), and Tom Garner on Leslie Young's Plenty in the Tank (Ire) were going so fast up front. Parker was so cool. He just had the horse in a great spot and made his move when the first two tired."

Plenty in the Tank held on for second, with Queens Empire (Ire), trained by Fisher, third and Nice to Meet Ya fourth.

"Bucko ran a huge race," said Brion. "That was the first time he'd stepped up to a novice stakes. It was a huge step up for him. He'll be going to Saratoga next."

"I thought Decisive Triumph was going to be very tough, so losing him early on certainly helped us." said Neilson of Mark Beecher's entry who lost his rider. "Skylar did a terrific job. She was very patient."

Princeville, owned by Fearnought Farm, trained by Doug Fout and ridden by Barry Foley won the first division of the $20,000 Maiden Hurdle by a nose over Market Bubble, owned by Northwoods Stable and trained by Fisher, with Howya Tuppence (Ire). owned by The International Venture and trained by Brion, third.