OCEANPORT, N.J.--Liz Merryman's owned and trained homebred Caravel,  ridden by Pablo Morales, stormed to the front in the stretch of the $78,000, 5 furlong Goldwood Stakes on the turf at Monmouth Park on June 25 to win by 4 1/4 l3ngths. 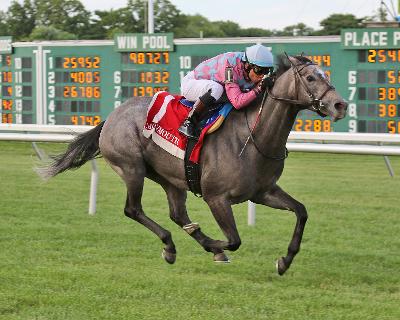 Caravel winning at Monmouth (Photo by Equi-Photo)This exceptional 4-year-old filly now has six wins and two seconds from eight starts and earnings of $257,872, having never finished off the board since her first race in June, 2020, at Penn National.

Merryman said that going into the Goldwood that she'd been worried Caravel would be beaten.

"This wasn't an ideal way to go into the race at Monmouth," said Merryman, "Caravel was dull for a day or so after shipping to Parx. On Wednesday,  she was pretty dull. It was almost like she was disappointed after being shipped to Parx and then not running. She loves to race, and it had been a long time between races for her.

"BUT ON WEDNESDAY, she seemed better, She ate up, and the she cleaned up her feed Wednesday night, too, so there was no reason not to go to Monmouth. 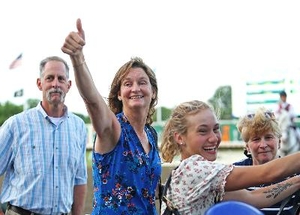 Liz Merryman after the race at Monmouth (Photo by Equi-Photo)"It was twilight racing at Monmouth on Friday, so she just shipped in for the day. She didn't have to be there until 2 p.m.

Then, in the race, number five acted up in the gate, plus she'd never been in the one slot before, so she kind of broke flat-footed. She came out a little and the two horse came in'" said Merryman.

So Caravel was fifth early on, but the two in front were flying, setting a first fraction of 20.56, and Caravel angled out entering the stretch and passed them easily to win by 4 1/4 lengths.

"Pablo's agent drove him down from Presque Isle just for this one race," said Merryman. "Pablo knows her so well, and he rides her with such faith and confidence, it's fun to watch."

Being a turf horse, Caravel is beholden to the weather.

"Hopefully, if the weather cooperates, she'll next run at Saratoga on the 24th," said Merryman.

Caravel is by Mizzen Mast, and a caravel was a small, very fast Spanish sailboat dating from around the 1,600 hundreds, said Merryamn.

GRAHAM MOTION has had four winners during the past 10 days, including two allowance races and two Maiden Special Weight races.

Running last for 3/4 mile, the 3-year-old filly began to move up, was five wide into the stretch, closed fast and went on to win under strong urging.

Perhaps Tonight settled into fourth early, made a strong bid three wide turning into the stretch and wen on to win under moderate pressure.

Wicked Hot stalked the pace and angled three wide in mid=stretch for the win.

Running second of the three that remained after the race was taken off the turf, Tonal Verse went to the front at the sixteenth pole and kicked clear for the win.