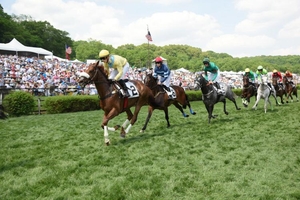 The races will be live streamed on the National Steeplechase Association's website, with the first post time at 1 p.m.

In his most recent race, his first this year, the Temple Gwathmey, he beat three of this races' entries, Irv Naylor's Amschel, trained by Cyril Murphy, who was third, Hudson River Farm's Galway Kid (Ire), trained by Keri Brion, who was pulled up, as well as his stablemate, Harold Via'a Footpad (Fr), who was fourth.

Foopad went into the Temple Gwathmey highly touted off his race record in England, where he won 11 races and hit the board 20 times in 26 races, but he started off far back in the field and never showed anything, so it will be interesting to see how he runs Saturday.

OTHER ENTRIES include a third from Fisher, Armata Stables' New Member (Ire), another from Brion, KMSN Stable's Sportswear, and another from Murphy, Naylor's Bedrock (GB).

The $50,000,, 2 1/4 mile Sport of Kings Novice Hurdle Stakes, drew a field of 12, with three from Fisher, including Fast Car, and Baltimore Bucko, trained by Brion, who campaigned in Ireland last winter and looked like he was going to be a winner when he fell at the last fence in deep going.

It looks like a wide open field with a number of the entries having just come off recent wins.

The $25,000, 2 1/4 mile Sport of Kings Filly and Mare Hurdle Stakes drew a field of 10. including Buttonwood Farm's The Mean Queen, trained by Brion, who was an historic winner in Ireland, and Mrs. S.K. Johnson's Amnicalola, trained by Fisher.

The timber race has nine entries, including Leipers Fork Steeplechase's Tomgarrow, trained by Leslie Young, who is coming off a good second to Schoodic at the Virginia Gold Cup.