COLUMBUS, N.C.--Mell Boucher, 18, who will only graduate from high school next week, won the featured $30,000, 2 mile Block House Ratings Handicap Hurdle race on The Happy Giant, owned and trained by Allison Fulmer, at the Tryon Block House Races on June 5. 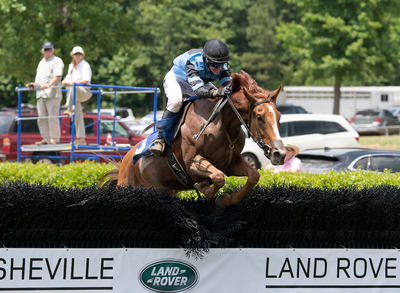 The Happy Giant, ridden by Mell Boucher, leads over the last fence at Tryon (Photo by Tod Marks)"I'd only ridden this horse a couple of times before this race," said Boucher. "His regular jockey, Ross Geraghty, got hurt. Allison is a good friend of our family, so she asked me to ride. He's a super cool horse. It's nice to ride something you can be a passenger on."

Boucher had just won her first race under rules earlier this year at Willowdale.

"Ross called me and told me how to ride the horse," said Boucher. "He told me to ride him out the back and just make my move late in the race. ˆI was worried that I'd gotten to the front to soon. In the past he'd only won by a nose or a neck, so I didn't know if he'd stop when he got in front. But he was OK. He has a good turn of foot."

Boucher said she plans to go to a tech college in Camden next fall.

"I was so delighted," said Mell's mother Lilith, who is also a trainer. "I was at home, watching the race live streamed. We're really proud of her. I'm glad she got a chance to shine. She and Allison have known each other for years. When Mell was only about 8 or 9, they rode together in a pair class at a horse show."

BRION SADDLED Irv Naylor's Chetzeron (Fr), ridden by Dan Nevin, to win the first division of the $20,000 Maiden Hurdle by 36 lengths in a race in which there were only two finishers.

Chetzeron went straight to the front and led by opening margins throughout the race as first Cause For Pardon fell and Shootin the Breeze lost his rider and then three of the four remaining horses pulled up.

"We bought this horse last year, and he came over here a year ago last March or April," said Brion. "He ran twice last year. He got tangled up with a fallen horse and then pulled up at Middleburg. Then at the Gold Cup he pulled up lame. He had a small chip in  his knee. We gave him time. The Naylors have been very patient."

"Chetzeron looks like the real thing," said Brion. "Dan didn't realize how fast he was going. Hopefully he'll  go in the first allowance race at Saratoga."

"He's a lovely horse," said Young. "We got him in 2018 at  a Horses in Training sale. He won a flat race at Fair Hill, then was third to Snap Decision and a good second in a maiden race at Colonial Downs. He got hurt at Foxfield, and we gave him a year and a half off. This was his second race back this year."

"It was super hot, and the ground was interesting." said Young. "The jockeys said it was dead feeling. After watching the first maiden race, we decided to let him hang out in back."

Silver Crescent moved up slowly and was in third at the second to last fence and then went on to the lead and to the win.

Vincent Van Gogo, owned by Flying Elvis Stable, trained by Neil Morris and ridden by Graham Watters, won the $10,000 Maiden Claiming Hurdle race by a neck over his stablemate Argentic.

"It was good to get a win under his belt," said Watters. "The ground was soft to good, thanks to the watering system down here. The track's in good condition."

"I've ridden him three times now and he's been second, third and now first," said Scully. "Thanks to Arch and Mr. and Mrs. Price for letting me ride him. He has a big old gallop on him."