Famous trainer Aidan O'Brien, who’s stable has become one of the biggest force in the Derby, confirmed to the media that he will have just one runner in the Epsom Classic on Saturday, which comes as a surprise. 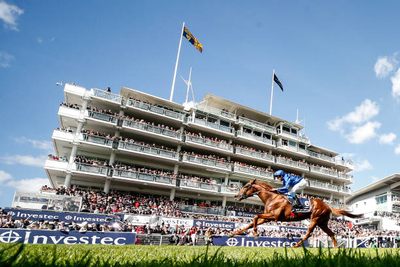 EpsomThe 51-year-old trainer will be relying on Bolshoi Ballet while High Definition will be racing in the Irish Derby at the Curragh later this month in a major switch in pre-race plans. O'Brien's decision saw Bolshoi Ballet ending the day with an even-money market leader while Frankie Dettori swapped to ride John Leeper.

British jockey Adam Kirby was set to ride Bolshoi Ballet, who is being trained by John Dunlop, but only as Dettori was chosen to partner the O'Brien runner. Punters, who have made preparations, need not to be disappointed with the new arrangement and with a NAP of the day, they can put everything back into place.

SPEAKING to the media, Dunlop said via Racing Post: “Frankie was the first choice and was approached quite a while ago, but he has been riding a lot for Aidan in England, and that was going to happen until the bolt out of the blue from Ballydoyle this afternoon,” said Dunlop.

“There are no negatives with Frankie riding in the Derby and the horse’s work is all done now. He’s done everything we’ve wanted him to do so far, and touch wood, everything is going well going into the race. The news today came a bit out of the blue, but once [the owner] MrsPatino heard, she was very keen and instructed us to see if Frankie was available.”

At the beginning of the week, rumours were claiming O'Brien would have a high number of runners, which was the norm, and that he has five entries left in the contest. However, the rumours were shattered as O'Brien spoke on Wednesday afternoon at the Curragh.
He said: “Nothing is written in stone until 10 o’clock in the morning [final declarations], but it looks like the two horses are going to be split.

“It looks like Bolshoi Ballet is going to Epsom and it looks like High Definition is coming straight here [to the Curragh]. Bolshoi would be our only runner at Epsom – that’s what the lads are thinking to give the two of them a chance at a Derby.
“It means there’s a little bit of extra time for High Definition and the two of them are getting a shot for the first time at a Derby each.”

During the winter, High Definition was previously the ante-post favourite for the major Classic after winning the Beresford Stakes back in September. This spring, however, has not been going good for the 3-year-old colt with several blood tests ruling him out of the Lingfield Derby Trial which was supposed to be his comeback to race.
Five days after High Definition returned to the scene in the Dante Stakes at York and he was able to finish the race third on the Knavesmire, which was not all that impressive. O'Brien later revealed that the 3-year-old will be saved for the Curragh.

“We were lucky to get the run into High Definition at York and we think he’s a very good horse. A little more time won’t do him any harm. It was just to give the two of them a chance until they have to meet. The Curragh Derby is a very important race, as the Epsom Derby is also,” O'Brien continued.

“I’m very happy with both horses. If we didn’t get the run into High Definition then there was no decision to make as if he didn’t run in York then he definitely wouldn’t go to Epsom.”
He also talked about his plans for the other horses: “St Mark’s Basilica and Van Gogh are going to France [for the French Derby, on Sunday]. Kyprios is going to Ascot for the Queen’s Vase and Sir Lamorak might go for the King Edward [also at Royal Ascot]. The Mediterranean is declared for the Nijinsky Stakes at Leopardstown on Thursday.”