FAIR HILL, Md.--Entered in the $50,000 Iris Coggins Memorial Filly and Mare Stakes at Fair Hill Races on May 26 as a substitute for trainer Elizabeth Voss' top mare, Sarah Joyce, who is enjoying a short rest period, Dawn Wall, owned by The Field Stable and ridden by Jack Doyle, won the feature by 1/2 length over Willow U with For Goodness Sake (Ire) third. 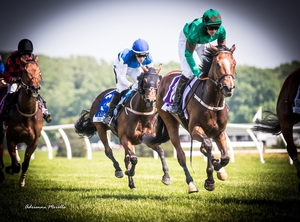 Dawn Wall just after after finish at Fair Hill (Photo by Adrienne Morella)Check mark Stables LLC's Willow U, trained by Richard Valentine and ridden by Shane Crimin led after the last fence, but Dawn Wall charged up through the stretch to just catch Willow U at the wire.

Paddy Young's For Goodness Sake, trained by Young and ridden by Willie McCarthy, who won this race last year, finished another 3/4 lengths back in third.

Dawn Wall got her name because she was born on the same day that the most difficult climb in Yosemite Park, the dawn wall, was finally scaled.

There are close connections, both equine and human, in Dawn Wall's breeding.

She is out of Guelph, who was bred by Voss' mother Mimi and raced by Laddie Merck's The Field Stable.

GUELPH WAS the 2005 National Steeplechase Association's novice and female champion and in 2008 repeated as NSA female champion, and she was trained by Voss' father Tom. 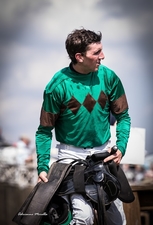 Jack Doyle (Photo by Adrienne Morella)This was only Dawn Wall's fifth race and third over fences, and she went off at long odds at Fair Hill, which has pari-mutuel betting.

"We love her," said Merck. "We're all for fillies"

"Elizabeth was very encouraged coming into this race," said Merck. "“She said Dawn Wall was training very well. I was a bit surprised. This is a nice way to break her maiden.”

Mrs. Johnston and Kathy Neilson both had two winners at Fair Hill, the first for Neilson being Johnston's Set to Music, ridden by Mitchell, in the $30,000 Sport of Kings Maiden Hurdle second division.

Set to Music won by 5 1//2 lengths over Kristian Strangeway's I am not Here (Ire), trained by Todd Wyatt with Sharon Sheppard's Khafayya, trained by Young and ridden by Eddie Keating, finishing third.

"He's a lovely individual," said Neilson. "He's been getting progressively better with his jumping. Gerard (Gslligsnz0 hunts him. He's a little fast out hunting."

Neilson's second win was in the eighth race, a $25,000 Allowance over hurdles, won by Move Up Stable and Sally Reed's It's Nothing, ridden by Keating.

It's Nothing won by a neck over Armata Stables' Going For Broke (Ire), trained by Stephanie Moore and ridden by Eric Poretz, with Hyggelig Haven LLC's Political theater, ridden by Paul O'Neill, third.

"Edie rode to instructions," said Neilson. "He stayed back and came at the end. He was second at Willowdale and third at the Manor."

"I had him, and I sent him to the flat races, but he didn't do well," said Neilson. "Nobody wanted him. Everyone handed him back to me. We love him. Sally Reed bought part of him to hunt, and she hunts him. She is never that enthusiastic about my running him, but I tell her it will be worth it."

Jimmy Day saddled Bruce Smart's Corstropine, ridden by O'Neill, to win the$20,000 Maiden Claiming Hurdle by  a head over Black and Blue Stable's Encrypt, trained by Fenneka Bentley and ridden by Darren Nagle.

"He won a nice flat race at Laurel," said Day, of Corstorphine, who has be running seconds and thirds over fences. "But over hurdles, he's had to make the running, and he likes to come from back. I've had him for two years. Bruce is a great owner." 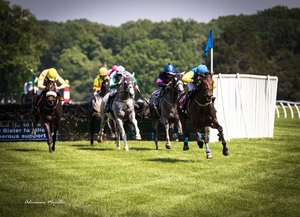 "This was his first race over hurdles," said McDermott. "He's a nice 4-year-old. He's a nice horse for the future."

Fair Hill concluded the spring steeplechase races, and the next jumping races won't be until July in Saratoga.