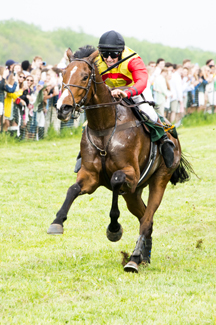 He finished the three mile race over soft turf in 6:39 1/5, the fastest time of the day.

“This was was his first race since the Hunt Cup,” said Davies. “He was a little nervous in the paddock, but he settled quite nicely early on in the race, running second or third for the first couple of miles.”

“He jumped great,” said Davies. “We were thrilled with him.”

Last year, Senior Senator was a real handful, so much so that Davies described him as “one of the craziest horses that ever looked through a bridle.”

He had to be saddled outside the paddock and taken to the start alone.

There was even a question of whether he would be allowed to run in the Hunt Cup because of his temperament.

But with patient handling through the past year,, his antics have diminished.

Davies said his aim was to run him in the Maryland Hunt Cup again.

“His owner has been very patient with us,” said Davies. “I hunted him a couple of times this past winter, and he was okay. But he kicks up in exuberance, and we were afraid he’d kick another horse or a hound, so I only took him out twice.”

“He’s a Virginia horse, and he’s won the steeplethon a couple of times,” said Davie. “Blyth (Davies’ wife) hunted him this winter. He’ll run in the little race at the manor and then hopefully either in the Hunt Cup or the Gold Cup.”

“Sometimes he’s a little bit of a problem at the start, but McLane rode him well, and he went well,” said Davies.

Fenwick also owns and trains Daddy in the Dark, who was ridden by Dahl to win the Novice Timber.

Easy Exit led all the way and was never seriously challenged to win by seven lengths.

Gordonsdale Farm’s Canyon Road, trained by Christopher Kolb and ridden by Jeff Murphy, who was not hard pressed at any point, won the Open Timber.