THE PLAINS, Va.--Schoodic, who won the International Gold Cup last fall, repeated at the Great Plains race course with a win in the Virginia Gold Cup on May 29. 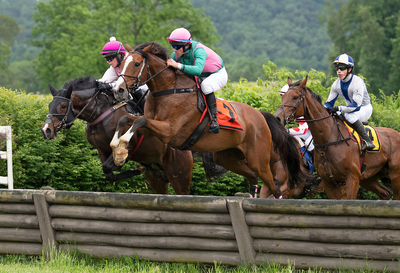 Fisher said that he had gotten to the  point that he wasn't a hurdles stakes horse.

"MY PARENTS are having fun with him, and I think Mrs. Dixon is having fun watching him," said Fisher. "It's great for my parents. I sent him to them when he was turned out, and they enjoyed having him. He has a great personality."

Mystic Strike, one of the pre-race favorites, stumbled badly on the flat early in the race and lost his rider, while Renegade River lead by as much as 10 lengths for most of the race,until  Schoodic moved up and passed him easily for the win.

"About three miles into the race, I began to think four miles is a long way," said Frost. "He's such a tough horse and such an athlete. Jack's horses are always read, so you can ride to win."

"I've had some good timber horses, and he's right up there with them," said Fisher. "I'll turn him out for the summer and bring him back for the fall races.

Schoodic has now run 10 times for the Fishers and has won six times with two seconds.

Her first win on the day was in the $30,000, 2 1//8 mile Allowance Hurdle with the Moorhead's Buttonwood Farms LLC's The Mean Queen, ridden by Tom Garner, who won by 8 lengths.

The Mean Queen had previously won a flat race in Ireland for Brion.

"Tom gave her a great ride,' said Brion. "She's a very, very good mare. We're definitely going to Iroquois with her.  For now, we'll probably stick to the girls' races with her, but we'll see in the future, she may run against the boys."

"He jumping keeps her in the game," said Garner.

"I was really confident coming into this race," said Brion. "I knew we had a fresh horse. "He's definitely going to Iroquois in the big race. Big thanks to Ed Swyer and the Moorheads. It's been a whirlwind since I took over from Jonathan (Sheppard, who announced his retirement earlier this year), and they've been so supportive. And now today I've won a Grade 3 race. It's mind blowing."

"I was really happy with Perfect Tapatino," said Young. "I bought him at the Keeneland Horses in Training sale for $11,000. He's such a classy horse. That was a pretty tough maiden race. He'll go to Iroquois in the novice race."

"I got him from Andrew Balding at a Newmarket sale," said Young.. He's had a year and a half off after he got hurt. He won at Radnor but was disqualified to second. Everybody's so happy with him. He has an old tendon now, so we have to pick our races."

"I was really happy with Tomgarrow's second in the Gold Cup," said Young. "He ran a fantastic race."

Other winners included Duc de Meran, trained by Cyril Murphy, in the $20,000 Steeplethon and Mighty Mark, trained by Kathy Neilson, in the $10,000 Apprentice Rider Hurdle.