SENECA, Md--Mark Beecher saddled two young, up-and-coming jumpers to win one hurdle and one timber race at the Potomac Hunt Point-to-Point Races on May 16. 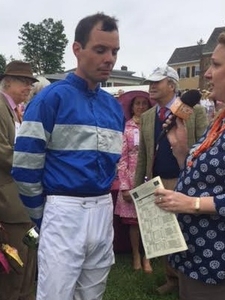 "Fused was supposed to run in a flat race at Pimlico on Preakness Day, but the race didn't go," said Beecher. "We've schooled him a bit at home,, so I thought to just school him around a point-to-point. He's only a 4-year-old, so I wasn't looking for a win. I told Sean just to give him a school, but he was pretty enthusiastic."

Fused, who is by Union Rags, led from the start in the eight horse field, was temporarily headed by Whiskey Chaser, ridden by Teddy Davies, but then won in a driving finish.

"The plan was to run him on the flat this summer, but entries look light at Colonial, so I may run him over hurdles again there," said Beecher. "I claimed him last year off Graham Motion. He just got to run one time on the turf last year. He was entered nine times, but he either didn't get in or it was off the turf."

"Master Seville has never run on the flat or over hurdles," said Beecher. "I think he has a good future.. He was third at Warrenton and second at Blue Ridge, so I told Sean just to let him roll along. He won nicely. If we have rain, maybe I'll run him at Winterthur. But he's a big horse and he's only 5. So we might put him away for the summer, and let him eat grass, and then bring him back in the fall."

Davies had the only two entries in the 3 1/4 mile Open Timber, winning with Bridge Builder, ridden by Dan Nevin, with Some Response, ridden by Teddy Davies, second by a head,

Neil Morris had the only two entries in the 2 1/8 mile Open Hurdle, winning with Skydiving, ridden by Gerard Galligan, who was 3 1/2 lengths in front of Junonia, ridden by Graham Watters.

Morris saddled My Own Lane to win the 1 3/4 mile Open Flat and Elizabeth Voss saddled Transit to win the Amateur Open Flat.