MALVERN, Pa.--Jack Fisher saddled DASH Stable's Prayer Hope to win the featured $20,000, 2 miles and 3 furlongs Ratings Handicap Hurdle at the Radnor Hunt Races that hosted only about a half its normal spectators. 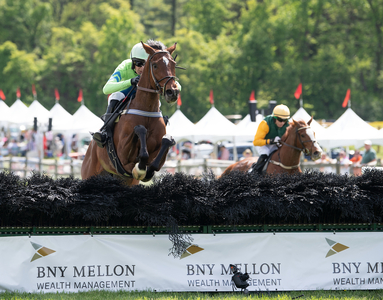 Prayer Hope leads Decisive Triumph over the last fence (Photo by Tod Marks)Because of the limited number of spectators, there was no jumbotron, so viewing the races was restricted to just a few fences at the beginning of the races and in the stretch.

Prayer Hope, ridden by Graham Watters, defeated Decisive Triumph, trained by Mark Beecher, by 2 3/4 lengths after going to the lead on the second circuit, leading narrowly over the last two fences and drawing away for the win.

Prayer Hope broke his maiden at Radnor in 2019 in his first race over fences after one start on the flat in 2018.

"I bought him in 2018," said Fisher. "He had a fracture when I got him, so I just gave him about four months off. Then, last year, he wasn't running well, and I found he had a fractured splint bone."

Earlier this year, Prayer Hope was second at Charlotte.

"He is what he is," said Fisher, adding that what he does next depends on how much his rating goes up.

TOM GARNER finished first in three races at Radnor, but one of his wins was disqualified for interference in the stretch.

Garner, on Makkadangdang, trained by Leslie Young, and Eddie Keating, on Telegram, trained by Elizabeth Voss, jumped the last fence together in the $10,000. 2 miles and 1 furlong Maiden Claiming race and raced together towards the finish when Makkadangdang veered slightly into Telegram,

Although Makkadangdang finished first, Keating claimed foul, resulting in the stewards taking down Makkadangdang, placing him second and giving the win to Telegram.

"I took my stick out, and my horse shied away from the stick," said Garner. "He didn't do much. Eddie should have gotten an Oscar for his performance."

"Tom didn't do much wrong," said Keating. "It was an accident. But his horse bumped my horse, and my horse lost all momentum. The stewards gave him a fine for dangerous riding, but Tom did everything he could to keep his horse straight, It was totally accidental. He shouldn't have been fined."

"He's a cool horse, I wish there were a few more like him," said Garner of Mystic Strike. "The race wasn't run ideally for him. Graham was going at a strong gallop in the beginning, and he opened up quite a big lead. I had a lot of ground to make up, and I just got there in time."

"I think he'll go to the Gold Cup and then probably the Genesee route and then try to win the Pennsylvania Hunt Cup for the third time."

Garner also rode the winner of the last race, Wendy Hendrik's Embrace the Grind, trained by her son Ricky, who won the $10,000 Maiden Claiming race by 1 length.

"He did it quite nicely," said Garner of Embrace the Grind. "He'll be a fun horse to have this summer."

"I've had him for quite a while," said Wendy Hendriks. "I bought him in Kentucky, and he ran at Delaware Park last year."

"He's an older horse now," said Keating. "He jumped great. There was quite plenty of form in the race. It wasn't an easy race."

Sempre Medici led throughout the race, was almost caught at the last turn and went on to win easily.