BALTIMORE, Md--in a thrilling, gutsy, three horse finish, Caravel, Elizabeth Merryman's owned and trained homebred 4-year-old mare, won the $100,000, 5 furlong The Very One Stakes on the turf at Pimlico by a nose on May 14. 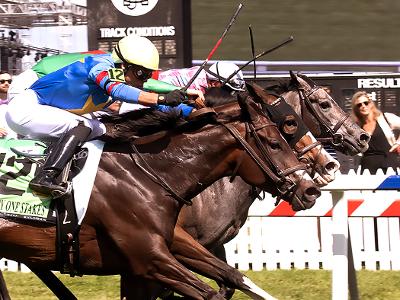 Caravel (inside) winning The Very One Stakes (Photo by Jim McCue)Completely blocked in until deep in the stretch, Caravel, ridden by Florent Geroux, found a tiny hole and broke through to just get up inside for the win over Gotta Co Mo, trained by Frank Kimmel, and Victory Kingdom, trained by Rudolfe Brisset..

"It wasn't good for my blood pressure," said Merryman. "She's brave and fast, and that's a good combination."

"She was training up to the race really, really well," said Merryman. "I'm usually not a very confident person about a race, but I went into this race more confident than usual. Then, she was so boxed in, and it looked like nothing was going to open up. Florent said she went through a hole most horses wouldn't go through. It was very exciting. She's something. She's fun to train because she's so classy. She has a lot of siblings, but unfortunately no full siblings. And her sire Mizzen Mast was recently retired as his sperm count was too low."

Caravel now has five firsts, including three stakes wins, and two thirds from seven starts and earnings of $212,872.

CARAVEL was third in her first start this year in License Fee Stakes at Belmont.

"The track was listed a good, but it had rained, and I think it was a little tiring." said Merryman. "The race was 6 furlogs, and I think she just got a little tired.  But that race really moved her up."

"There's a Pa-red race at Parx in June, but I was looking at that race for another filly I have," said Merryman about Caravel's next race. "I would love to take e to Woodbine, but there are some nice races at Belmont for her, too. I'll have to investigate the possibilities. But Woodbine is a strong possibility."

Mean Mary showed she's back in a big way as she went straight to the front from the start, controlled the pace and went on to win under a hand ride by 1/2 length over Vigilantes Way, trained by Shug McGaughey.

Seventh in the Breeders' Cup Filly and Mare Turf race last November, Mean Mary had previously been second in the G1 Diana Stakes after winning the G2 New York Stakes on June 27.

Motion also saddled Werheimer and Frere's homebred Alda to win the $100,000, 1 mile Hilltop Stakes at Pimlico on May 14.

Four wide on the turn, Alda swept to the lead at the eighth pole and held on to win by a neck.

The day before, Motion had saddled Sam-Son Farm's homebred Dance Some Mo to win the $100,000, 1 1/8 mile Maiden Special Weight on the turf by 1/2 length at Churchill Downs.

Bumped at the start. Golden Law was bumped again but rallied to the front late and drew clear to win by1 1/4 lengths.

BALTIMORE, Md.--In a thrilling, gutsy finish, Caravel, Elizabeth Merryman's owned and trained homebred 4-year-old mare won the $100,000, 5 furlong The Very One Stakes by a nose  at Pimlico on May 14.

Completely blocked in until late in the stretch Caravel, ridden by Floret Geroux, found a tiny hole and squeeze through to race up on the inside and just nip Gotta Go Mo, trained by John Kimmel, by a nose at the wire.