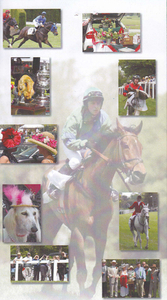 "I was thrilled to win for an old friend, Patrick Worrell, and his friend John Greene," said Young. "Patrick won the Maryland Hunt Cup on Von Csadek,, but he's been out of steeplechsing for a long time, so it's great to have him back in the game. He and John went to St. Paul's School in Maryland together."

"Mr. Haire is a cool horse," said Young. "I got him in West Virginia from a girl who sells horses off the flat track. He's very careful and a very good jumper."

"Eve Ledyard rode him before this race at the Blue Ridge Point-to-Point when I couldn't find a jockey," said Young. "She works for me, and she gave him a great ride, They were second."

"I have about 14 horses there," said Young. "I'm still renting the barn on Wilson Rd., but it's small. I have eight horses there. The barn is small, but the gallops there are priceless."

McLAIN HENDRIKS, after riding a winner at Willowdale on Saturday, rode another winner at Middleburg on Sunday.

"This was his first race over fences," said Hendriks. "We've had him about a year. Dad ran him once on the flat last fall, and then we were schooling him over fences all winter."

Hendriks was also a close second on Joy Slater's Fat Chance Farm's Flaming Sword, who was just caught at the wire to lose to EHB Racing's Huyana, trained by Casey Pinkard Savin and ridden by Eddie Keating, in the Middleburg Bowl Open Timber.