KENNETT SQUARE, Pa.--Kiplin Hall's Renegade River, trained by Willy Dowling and ridden by Eddie Keating, went right to the lead in the $35,000, 3 1/2 mile Timber Stakes at Willowdale Steeplechase on May 8 and held off a fast closing favorite Schoodic to win by a head. 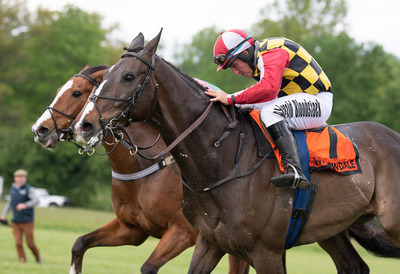 Renegade River, Eddie Keating, beat Schoodic in Willowdale Stakes (Photo by Tod Marks)Converted from hurdles to timber in 2019, Renegade River ran seven times in 20019 and 2020, hitting the board three times before slipping and falling in the allowance race at the Pennsylvania Hunt Cup last fall.

In his first start this year, Renegade River again went right to the front and went on to win the Maiden race at My Lady's Manor by 4 1/2 lengths.

Mrs. John R.S. Fisher's Schoodic, trained by Jack Fisher, was the big favorite to win the Stakes, but he was still 10 lengths back when he moved up to second on the final turn and despite closing fast just missed the win.

"He's 17 hands, so it's taken him a while to grow into himself," said Dowling of Renegade River. "He's 8 now. Last year we found out he had kissing spine, so we did the surgery for it on him, and it made a big difference."

"Eddie gave him a great ride," said Dowling. "I think he stole the race. The horse jumped brilliantly. We were lucky."

Nancy A. Reed's homebred Awesome Adrian, trained by Kathy Neilson and ridden by her daughter Skylar McKenna, was 4 1/2 lengths back in third.

SANNA NEILSON saddled her own He'll Do, ridden by her son Parker Hendirks, to win the featured $15,000, 2 1/4 mile Ratings Handicap Hurdle race by 2 3/4 lengths over Riverdee Stable''s Gostisbehere, trained by Jack Fisher and ridden by Graham Watters.

"I bought He'll Do as a 3-year-old," said Sanna. "Jodi Petty called me and told he he'd been riding a horse he thought would make a jumper. He's been very consistent. He's a really useful horse. I thought yesterday's race would be too tough for him, but he stepped up his game and won."

"He still has quite a low rating so I'll look for another ratings handicap for him," said Sanna.

Kathy Neilson saddled her own Mighty Mark,, ridden by Skylar, to win the $10,000 Apprentice Hurdle race by 2 3/4 lengths over Adlestrop Hill's Paddy's Crown, trained by Richard Valentine and ridden by Chloe Hannum.

"I bought Mighty Mark as a 2-year-old," said Kathy. "Kathy Rengart told me about him. I named him after my significant other, Mark Gregory. He's won both on the flat and over fences for me.  He's a cute horse. He's difficult to ride in the morning, but Skylar does a good job with him."

"Maybe I'll run him back at Radnor," she said. "He was bright and cheery this morning,, and the ground should still be good."

Kathy raised the money to allow the Maiden Timber race to be split in two.

"I just called the friends of Willowdate," said Kathy. "It was easy."

"Dixon put  in all new timber fences," she said, referring to Willowdale's Dixon Stroud. "They're very user friendly. All the horses jumped them well. Dixon keeps these grounds like Cheltenham."

For her first recognized win, Mell had the traditional bucket of water dumped over her, but this bucket was also filled with ice, a bit chilling on a 50 degree, cloudy day.

"Mell was flying back to Camden, so she had a change of clothes," said Boucher.

"He's a lovely horse," said Boucher, "He's Charlie Kuhn's homebred by English Channel. He was running on the flat and then he was referred to us, and Charlie was delighted to have a chance to extend his career. This was only his second start over fences."

McLain Hendriks rode William Russell's Holiday Mouse, trained by Neil Morris, to win the first division of the 10,000 Maiden Timber race by 2 lengths over Rather B Racing's Our Legend, trained by Fisher and ridden by Waters.

Mark Beecher saddled Meriefield Farm's My Afleet, ridden by Watters, to win the second division of the $10,000 Maiden Timber by 9 1/2 lengths over Kinross Farm's Great Road, trained by Joe Davies and ridden by Teddy Davies.

"My Afleet is 10 now," said Beecher. "He's a classy old horse. He was my first NSA winner as a trainer. He was placed in 100,000 hurdle races, then we converted him to timber. He was second at the Grand National. This was his first time racing as a straight maiden over timber. He may go to the steeplethon at the Gold Cup or to the open timber at Winterthur. It depends on the ground."

Todd Wyatt saddled Riverdee Stable's Include It, ridden by Keating, to win the $10,000 Apprentice Rider Timber race by 3 3/4  lengths over Sally Reed's It's Nothing, trained by Kathy Neilson and ridden by Skylar.

"Include It won at the Grand National," said Wyatt. "He's won his last three races now. He sat in the middle of the pack at Willowdale and then moved up for the win."

"He's probably done for the spring," said Wyatt. "We'll  try to find a spot for him this fall."