Snap Decision won the G2 Temple Gwathmey at Middleburg, his eighth win in a row

MIDDLEBURG, Va.--Bruton Street-US' Snap Decision, trained by Jack Fisher and ridden by Graham Watters, made light work of the G2, $75,000 Temple Gwathmey Stakes at the Middleburg Spring races on May 1, running mid pack until easily accelerating past  the leaders to win by 9 1/4 lengths over Razoul, trained by Kate Dalton and ridden by Bernie Dalton. 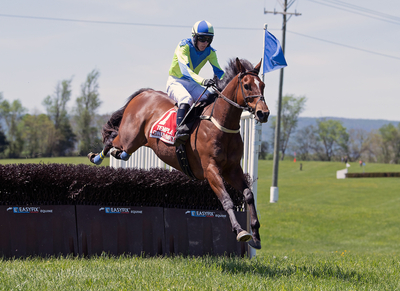 Snap Decision leads over the last fence in the Temple Gwathmey Stakes (Photo by Tod Marks)That made it eight consecutive wins for Snap Decision, five of the previous having also been in stakes, after finishing second in his first two starts over fences.

Royally bred by the Phipps Stsble, Snap Decision is by Hard Spun out of an Unbridled mare and ran  in stakes and allowance races on the flat, finishing on the board a number of times prior to Bruton Street's buying him and converting him to hurdles.

"He ran a great race," said Charlie Fenwick, who is a partner along with Mike Hankin and Charlie Noelle in Bruton Street.

Fenwick, however, wasn't at Middleburg as he was at the Derby watching Hidden Stash, another horse in which he has a partial ownership.

PRIOR TO the Temple Gwathmey, the race was touted as a "Clash of Titans,"  "between Snap Decision and Footpad, a Cheltenham Festival winner and European juggernaut with 11 victories in 26 starts and earnings of more than $900,000."

Footpad (Fr) is now owned by Harold A. Via, Jr. and is also trained by Fisher.

But the "Clash of Titans" never transpired, as Footpad was never a factor, finishing fourth of six in the race, beaten over 50 lengths.

"His rider didn't give him much chance," said Fisher. "He took him back to last. Footpad had run over steeplechase fences overseas so he jumped a little high."

"Footpad may run back in the Gold Cup," said Fisher. "Snap Decision will go to Iroquois. That will be a tough race."

Fenwick also owns Withoutdestination, trained by Todd Wyatt and ridden by Watters, the winner of the $20,000 Maiden Hurdle by 2 lengths over Hurricana Farm's Sherkali (Ire), trained and ridden by Arch Kingsley.

"Blair Wyatt and Sean Clancy found Withoutdestination for me at a sale in England. He's now won four races for me, two on the flat and two hurdles, from four starts.."

"Todd has done a good job with him, moving him along slowly and deliberately." said Fenwick. "He's been well managed and seems to have some talent."

"I haven't seen him run yet," said .Fenwick. 'It's said "Keep yourself in top competition and your horse in weaker competition." I was at the Blue Grass Stakes once when he won and then at the Derby this time. He'll run in better company next time out,, so I'd better find myself at a race with the Queen."

Bruton Street's partners, along with owning a number of top steeplechase horses, were instrumental in starting the live streaming of all recognized steeplechase races, a terrific program that allows fans from all over a chance to watch the races.

The live streaming is professionally done, and whether accompanied by interviews between races or not is greatly appreciated.

"I've has Invocation for the past two years," said Beecher. "He was pretty high up in ratings over hurdles, so I thought to change him to steeplethon. He's a cool horse. This was his fourth win in steeplethons and he's been second twice. Pretty good. He won the last time at Middleburg and then at the Gold Cup. I'll probably run him back at the Gold Cup in the steeplethon."

KATHY NEILSON saddled her own Tricked Up, ridden by her daughter Skylar McKenna, to win the $15,000 Maiden Claiming Hurdle race by 3 3/4 lengths over Yankee Doodle Boy, trained by Doug Fout.

"Skylar picked him out," said Neilson. "We claimed him at Laurel. He was kind of sore when we got him, so we turned him out and then taught him how to jump."

All the hurdle races at Middleburg were run over the new EasyFix fences at 2 miles and one furlong, except for the Temple

"The new hurdles will require a bit more jumping," said Neilson. "The horses can't brush through them like they could the old ones. But all the hoses jumped really well at Middleburg. Once the horses get adjusted to these fences, it should make all of them better jumpers."