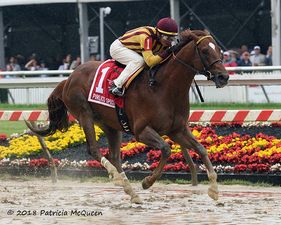 After winning the G2 Wood Memorial at Aquesduct on April 8, 2017, there was a great deal of excitement in deTomaso's family, which includes Bambi Glaccum of Unionville, Pa., who is secretary at Plantation Field, prior to his running in the Kentucky Derby, but he ran 10th in that race.

He returned in the G1 Belmont Stakes to run a very good second to Tapwrit but then disappointed in the G1 Haskell that deTomaso, related to Amory Haskell, had wanted to win.

The Pimlico Stakes signaled his return to the winners circle.

THE MATCH series, which has returned after an absence of 16 years, includes races in Pennsylvania, Maryland and New Jersey, and the first in the series was run at a rain soaked Pimlico on May 18. 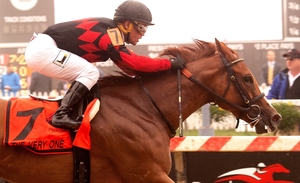 Girls Know Best wins The Very One in Match series The enthusiasm shown by the participants was a positive sign for the Series as it moves next to Monmouth Park on May 26.

Kirk and Judy Robison’s Vertical Oak ran her record to two-for-two at Pimlico  with an impressive victory in the $100,000 Skipat Stakes, the first of 25 races in the 2018 MATCH Series.

Steady rain over the May 18-19 Preakness Stakes weekend proved a challenge as numerous races were switched from the turf to a dirt track rated sloppy on both days.

Overall pari-mutuel handle for the 14-race Preakness program was down only 3.6 percent despite an average field size of 6.64, but the MATCH races handle provided encouraging news.

The Preakness Day MATCH Series races—the G3 $150,000 Maryland Sprint Stakes and the $100,000 The Very One Stakes—had fields of nine and eight, respectively.

Only one other race had nine runners, and one other one had eight.

The Maryland Sprint, 3-Year-Old and Up, won by Woodford Racing’s Switzerland, generated more than $4 million in wagering, down a bit from last year but roughly double the handle in 2016.

The Very One Filly and Mare Sprint on the turf, captured by Brian Chenvert and Eddie Kenneally’s Girls Know Best, came off the grass with six scratches, but it handled more than $3.5 million, much higher than last year when it was run on the turf and comparable to 2016 when a field of 12 raced on the turf course.

“Everybody braved the weather and was enthusiastic,” Sinatra said. “We’re glad to see the MATCH Series back, and now we can build on that. The weather definitely impacted the fields, particularly on Friday. We’ll just regroup.”

“We worked so hard to get everyone focused on MATCH and it exceeded our expectations, except for mother nature, who did not cooperate," said MATCH creator Alan Foreman. "Despite the challenge of the most abysmal weather conditions in Preakness weekend history, we had a great debut and the response was tremendous. We thank Maryland Jockey Club and the Stronach Group for their support this past week. It was like old times. We look forward now as the Series moves throughout the region”, .

Hall of Fame trainer Steve Asmussen, who trains Switzerland and Vertical Oak, has a regular presence in New York and indicated he plans to continue participating in the MATCH Series.

“We do have horses that fit the Series, and we expect to use it,” he said.

Mike Hall, a partner in Breeze Easy, said the MATCH Series “seems like a wonderful project you’ve all put together,” while Joe Orseno, who trains Imprimis, said the Florida-bred will remain with his Monmouth string this summer and could reappear in the Series, either at Hollywood Casino at Penn National Race Course or Parx Racing.

The Series now moves to Monmouth Park, where the first of the five races in the 3-Year-Old and Up Long—Dirt Division, the $100,000, G3 Salvator Mile, is one of four stakes on the Saturday as part of its Memorial Day Weekend celebration.

Entries will be taken May 23, the same day nominations close, for the $200,000 Pennsylvania Governor’s Cup 3-Year-Old and Up Sprint on theTurf  and $100,000 Penn Ladies Turf Filly and Mare Sprint on the Turf, both scheduled for June 2 at Penn National.

TRIGGER WARNING won the 12th running of the Tom Ridge Stakes at Presque Isle Downs on May 21. 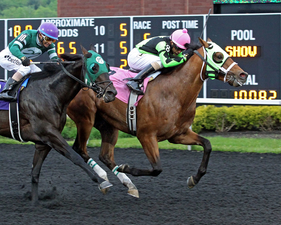 Trigger Warning was making his first foray into Pennsylvania after running at Sunland Park in New Mexico, and this was his firt stakes win..