MINERAL SPRINGS, N.C.--Arch Kingsley, a top jockey who turned to training, saddled J. David Richardson's Kilronan in the $20,000, 2 miles and one furlong Maiden Hurdle race at the Queen's Cup Steeplechase on April 24, and then got on him himself to lead most of the way and go on to win by 3 lengths. 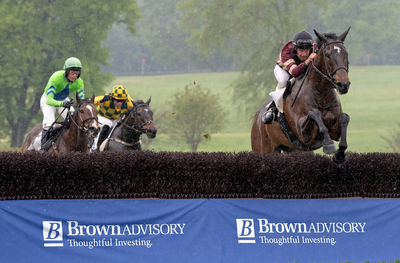 Kilronan leads over last fence at the Queen's Cup (Photo by Tod Marks)It had been eight years since Kingsley last rode in a race, but he certainly hasn't lost his touch.

"It's drinking from the fountain of youth," said Kingsley. "That, and good horses. I have a bunch of nice maidens in the barn, and I don't have a jockey. I'm just  looking out for my horses and my owners."

Kingsley, who has 12 horses in training, said that without a steady jockey, you don't always get the best ride, so he will continue to ride his own horses while he looks for someone who will school horses and then ride them in races for him, or maybe even someone who will work for him.

"We bought Kilronan as a yearling, hoping he'd develop into this kind of a horse," said Kingsley of the 6-year-old Kilronan. "We started him first on the flat, and he broke his maiden, but we couldn't find another race for him without dropping him into a claiming race where he might be claimed. He's been getting bigger and stronger. He's been popping over logs since he was a yearling. This was his first race over fences except for a tw0-horse race at a point-to-point that was more like a school."

"WE'RE LOOKING at an allowance race at the Gold Cup or else maybe a race at Iroquois for Kilronan," said Kingsley. "We'd like to get him to Saratoga healthy."

Kingsley then trained the first, second and third placed horses in the final race on the card, the 1 1/4 mile Training Flat race.

"Well, we were half the field," said Kingsley, who also rode the third placed horse, Mark W, Buyck Jr.'s Show Court (Ire). "So the odds were in our favor. But, still, we had some nice horses in there."

Hurricana Farm's Do the Floss (Ire), ridden by Gerard Galligsn, won by 3 1/4 lengths and will run in a maiden hurdle at Middleburg this weekend, while the second placed horse, Carington Holdings, Inc.'s Hurtgen Forest, ridden by E. Scully, is a NY-bred 3-year-old that Kingsley wants to race in New York.

Show Court is aimed for the Carolina Cup.

Kate Dalton saddled her own Down Royal, ridden by Bernie Dalton, to win the $20,000 Rating Handicap Hurdle by 6 lengths over DASH Stable's Prayer Hope, trained by Fisher and ridden by Watters.