Kate Dalton and Doug Fout each win 2 at Old Dominion 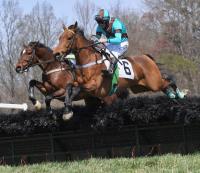 Razoul ridden by Bernie Dalton won the Open HurdleFout opened the day in the first race with Beverly Steinman's Go as You Please, ridden by Sophie Henelius, who rallied to overtake Ebullience, owned and trained by Sanna Neilson and ridden by her son Parker Hendriks, to win by a head in the Amateur/Novice Rider 2 mile Hurdle.

Dalton took the second race, the first division of the Maiden Hurdle, with Edition Farm's Riendo, ridden by Bernie Dalton. who overtook Embrace the Grind, owned by Wendy Hendriks, trained by Ricky Henriks and ridden by Courtney Dankanich, in the run in after the last fence to win by 2 lengths.

Dalton then saddled Hayabusa One to place second to Gostisbehere, owned by Riverdee Stable, trained by Jack Fisher and ridden by Graham Watters, in the third race, the second division of the Maiden Hurdle.

Dalton won the second time in the Open Hurdle with Del Rio Chasers' Razoul (Ire), ridden by her husband Bernie. who won handily by 2 1/2 lengths over Prayer Hope, trained by Fisher.