NORTHBROOK, Pa.--McLane Hendriks won two races, including one on Officer Sydney in the fastest race of the day, at the Brandywine Hills Point-to-Point on Easter Sunday, April 4, a beautiful spring day with the temperatures finally climbing into the 60s.. 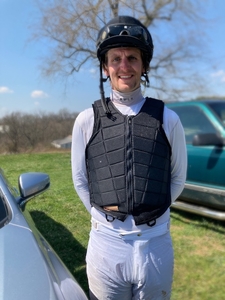 Mclane HendriksOfficer Sydney is owned by McLane's grandmother Wendy Hendriks and trained by his father Ricky and he won by 2 lengths over Aquies, owned by Irv Naylor, trained by Kathy Neilson and ridden by her daughter Skylar McKenna, with Spoiler Alert, owned and trained by Billy Mister and ridden by John Brophy, third.

"George Mahoney and I bought Officer Sydney from Gordon Elliot," said Ricky,, who trained Officer Sydney to two wins over hurdles for Mahoney's Rosbrian Farm. "He got injured  in 2018, and George gave him to me."

"He was a bit keen early on," said McLane. "He jumped so great, and then on the backside he just  tugged me to the lead."

Officer Sydney then led for the rest of the race, leading over the last fence and going on for the win.

"He'll go the My Lady's Manor next week," said Ricky. "I also have Cheers to Us, who won last week at Cheshire, going to the Amateur race there, and Pincer Movement (who won the last race at Brandywine under Courtney Dankanich) going in the Maiden."

Courtney Dankanich "I rode him in a steeplethon last year," said McLane.. "I spent the winter legging him up, so it was nice to have all those cold days pay off. I got a great trip. He outjumped the other horse at the last fence."

McKenna rode Naylor's Aggressive (Ire),, trained by Neilson, to win the first timber race, the Lady Rider, in a walkover when the only other horse in the race, Battle Aray, owned and trained by Meister, lost his rider, Gabrielle Bernier, at the last fence.

"We've had him for about three years," said Neilson. "He's won over hurdles. We gave him some time off two years ago, and then he missed the whole Covid year. He's been foxhunting. He's the sweetest, kindest animal. Skylar did a great job schooling him for this."

The grand old campaigner Grand Manon, owned by Armata Stable, trained by Meister and ridden by Brophy, went right to the lead, as is his modus operendi, in the Open Timber, leading at times from anywhere from 6 to 15 lengths, to hold on for a 3 length victory over Blythe Davies' Coastal Moon, trained by Joe Davies and ridden by their son Teddy, after Pitching, ridden by Bernier, was pulled up.

"I've had him since he was 6," said Meister, "He's won here five or six times. He's won four stakes. He's a funny old horse. He'll go to the Grand National next and then on to the Maryland Hunt Cup. This will be his first time to run in the Hunt Cup."

Pincer Movement won very easily by 6 or 7 lengths over Sycamore Run Farm's Scherzo, trained by Neilson and ridden by McKenna, after Julie Nafe fell off her Gun Lobby on the back of the course.

"We've had Pincer Movement for a couple of years," said Dankanich, who is Hendriks' assistant trainer and who also had been second in her first ride over fences the day before at Old Dominion on Embrace the Grind.

Dankanich has now won six races including one under rules,

"I wanted to be in front over the log so that I could cut the corner to the next fence," said Dankanich, who went on from there for the win. "We gave him time off over the winter. I ride him every day. He's a bit of a quirky horse."

Brandywine opened with a series of well filled pony races and a Junior Field Master's Chase, which was won by Neilson's younger daughter, Nina McKenna, on Embarrassed over a field of three.