UNIONVILLE, Pa.--McLane Hendriks repeated his win in the National Steeplechase Association sanctioned $7,500, 3 mile Louis Neilson III Timber race for Apprentice Riders, but this year he did it on his Grandmother Wendy's Cheers to Us, trained by his Father Ricky. 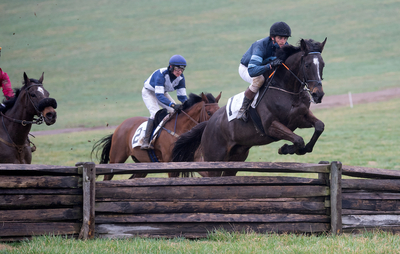 McLane had already ridden once around the Cheshire course, having won the previous race, the Joseph Walker II Memorial Cheshire Bowl Open Timber on Michael A. Smith's Le Chevalier, trained by Julie Gomena, when he went off course.

"I'd' been following the other horses in the field in the Cheshire Bowl," said McLane. "In the first section of the Neilson, I was  in front. When you come off the bottom turn, there's a fence on the right that's in front of you. You have to turn sharp left to follow the course. I jumped the fence in front of me, and then I realized something was wrong when I saw the other horses all off on my left."

"THIS WAS Cheers to Us' second sanctioned win," said McLain. "He won his first timber race last fall. It's good to get him back in form for the spring meets. He'll probably go to the Manor next." 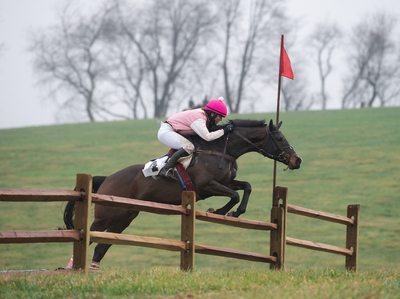 Royal Ruse, ridden by Skylar McKenna (Photo by Tod Marks)Cheers to Us, who led throughout most of the race, was overtaken nearing the stretch by Nancy Reed's Awesome Adrian, trained by Kathy Neilson and ridden by her daughter Skylar, but Cheers to Us found another gear and went back into the lead to win by 3 lengths in 5:47 2/5 over Awesome Adrian with Sherry Fenwick's As You Like It, trained by Sanna Neilson third.

"It's pretty special to win the Neilson race," said McLain. "Paddy was my childhood hero. So it was great to win it last fall and even better to win it again this year."

Sanna saddled the winner of the first section of the Neilson, Charles Fenwick's Royal Ruse, ridden by her niece Skylar.

Royal Ruse won by 8 lengths in 5:40 over Sally Reed's It's Nothing, trained by Kathy Neilson and ridden by Aaron Davis, with Officer Sydney disqualified and Irv Naylor's Aquie pulled up.

"Royal Ruse had a bit of a setback two weeks ago when he had a cough, so I was worried about his fitness, particularly with the deep going," said Sanna. "He's an exciting, fun horse. Skylar''s won three races on him now. She rides him beautifully."

It rained all morning the day of Cheshire races, but cleared to clouds with a faint occasional drizzle for the afternoon,

"Sanna bought Royal Ruse from Jonathan Sheppard a couple of years ago," said Kathy. "Skylar won on him at the Pennsylvania Hunt Cup last fall, and he broke his maiden there with Skylar the year before."

McLain rode Le Chevalier to win the Cheshire Bowl in 5:56 by 10 lengths over Naylor's Super Saturday, trained by Kathy and ridden by Skylar, with Naylor's Jeffery G, trained by Jason Cole and ridden by Forrest Kelly placing third.

"Le Chevalier is a crafty old horse," said McLain. "He told me when he wanted to go. I was just along for the ride."

"We had a good day," said Kathy. "Skylar won three races. And I was delighted to finish second with It's Nothing. Aaron's a good young rider.

Skylar helped herself to a couple of her wins by saving a lot of ground on the turn into the stretch when the other horses went wide.

McLain has moved into training now as well as riding, and he had his first starter as a trainer with A N R Partners' Alert N Ready, who finished fourth under McLane in the Novice Timber.

"It was a little nerve wracking riding a horse I'd also trained," said McLain. "I hunted him all winter. I'm going to run him back at Brandywine."

The final race, the Joy Valentine Side Saddle race, was won by Evacuation, owned, trained and ridden by Rebecca Pelet over a six horse field, with Kieran Donadson on Sky Babe second.

"Pony racing was the highlight of the day," said Kathy. "There were so many ponies and so much enthusiasm."

There were so many Small Ponies that that race was split with five in each section.

Pony racing trains future steeplechase riders, with many of today's riders and trainers, including Ricky Hendriks, having started their careers there.