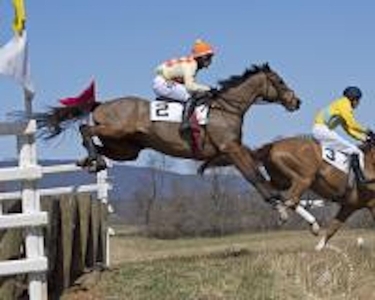 Coastal Moon  ridden by Teddy Davies (Photo by Joanne Maisano)The seven races  carded at Piedmont enjoyed fairly good entries, with three horses entered in each of the four timber races and up to seven in the flat races.

With last year's Maryland Hunt Cup canceled due to Covid, this year's race, whether it will allow spectators or not still to e decided, is highly anticipated.

Just Wait and See made short work of his opposition, beating Hooded, owned by Irv Naylor, trained by Cyril Murphy and ridden by McLane Hendriks, by 1 furlong, with Flash Jackson third.

Hendriks rode Naylor's Indian Hawk (Ire) to win the first race, The George Robert Slater Memorial Maiden Timber, by a length over Chris Gracie on Include It.

Davies, when he beat Chris Gracie on Hafajay (GB) by 2 1/2 lengths.

CHLOE HANNUM also had her first win over fences on Adlestrop Hill's Cocodimama in The Thomas M. Beach and Virginia A. Beach Memorial Lady Rider Timber.

It was close right to the finish with Erin Swope on Bridge Builder second by 1 1/4 lengths and Skylar McKenna on Aggressive (Ire) third.).

Valentine saddled his second winner in the Maiden Flat, with Paddy's Crown winning by 4 lengths.

The Foxhall Farm Cup was won by the team of three riders who navigated the course the fastest and jumped all the larger fence options.

KERI BRION has suffered countless setbacks in her quest for a winner in Ireland's steeplechase races, from multiple races cancelled due to weather, to deep, holding going not suited to her string and minor injuries, and now French Light ran a disappoining fifth in a $19,500 Rated Hurdle at Downpatrick on March 21, and was found after the race to have scoped with mucus.

"So he's a bit sick, unfortunately," said Brion, whose second entry at Downpatriack, Scorpian's Revenge was an also eligible and was scratched.

Previously at Down Royal on March 19, Baltimore Bucko was making a huge move and was in the lead by 1/2 length, looking like he was going to win, when he fell at the last fence after standing back too far, and The Mean Queen was second in a flat race the same day.

Baltimore Bucko will run next April 4 or 5 at Fairyhouse, and The Mean Queen and Scorpian's Revenge wil run April 4 at Cork.

"Winston C has had a few minor setbacks, and Mr. Swyer and myself have decided to just freshen him up and aim him for Saratoga," said Brion.

On March 13, also at Laurel, Jenkins saddled another owned by Hillwood, Cordmaker, to win the $100,00, 1 1/8 mile Harrison E. Johnson Memorial Stakes by 1 length.

Cordmaker set an easy early pace and drew clear under pressure for the win.

RONNIE HOUGHTON had another rhomebred winner for this mother Betsy's Sylmar Farm when Amigos Tune won a $31,600, 6 furlong race at Penn National by a neck.