WARRENTON, Va.--After a full year of no point-to-point racing and very little steeplechase racing, the 2021 season got underway at Warrenton Point-to-Point on Saturday, March 13. 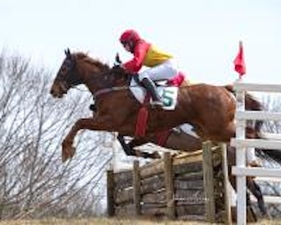 Highway Prince and Skylar McKenna (Photo by Joanne Maisano)Skylar McKenna had a very good day, winning two of the four steeplechase and flat races that filled of the six carded, while Courtney Dankovich won a second flat race and Sophie Henelius won the other jumping race over McKenna.

The entries were very light, and the consensus was that, because the early recognized races had been cancelled, trainers weren't in a hurry to start their horses this early in the season.

A fifth race, the Winmill Side Saddle Chase Cup, which drew four entries, was won by Julie Nafe on Sky Baby by 5 lengths over Devon Zebrovious on Soul Approval.

"SKYLAR settled into third for most of the race," said Neilson. "She went to the front late, and Teddy Davies looked like he was going to go right by her. But she gave Highway Prince one slap on the shoulder, and he won nicely." 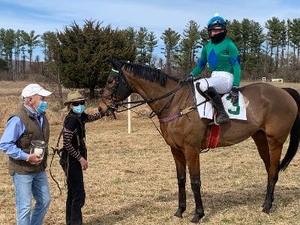 McKenna then won the sixth race, a 1/2 miles Open Flat race, on Nancy J. Reed's Awesome Adrian by 1 3/4 lengths over Henelius on Yankee Doodle Boy and Dankovich on Better Tapit.

"Awesome Adrian is a homebred of Nancy's, named after her grandson Adrian," said Neilson. "Skylar had said before the race that it was going to be a fast race. She said, `Should I try to win it, Should I hit him,' and I said no. But then a huge hole opened up and she won."

"It's so much fun to win for Nancy," said Neilson. "Those horses are so close to her." 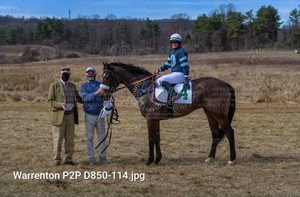 Courtney Dankavich on Embace the Grind after winning at Warrenton"We got Embrace the Grind last year as a 3-year-old," said Dankovich, who is Hendriks' assistant trainer. "He's muscled up nicely, and hopefully we'll run him over fences in a couple of weeks. We ran him on the flat at Delaware Park last year, and he ran second. We started schooling him over hurdles. and then he had some time off before starting at Wsrrenton."

"I'm going to take both Awesome Adrian and Highway Prince to Cheshire," said Neilson. "The races can be seen on the National Steeplechase Association website, but they won't be live streamed all day. They'll be run as a condensed version on NSA at 7 p,m,"