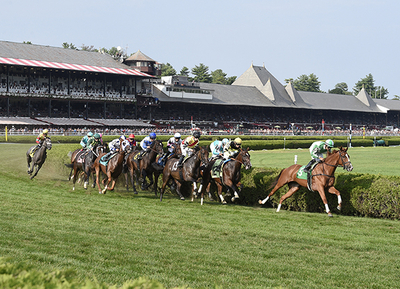 The New York Racing Association has carded nine jump races for the Spa -- the same as last year -- but purses have been increased significantly -- from a total of $554,000 in Covid decimated 2020 to $785,000 this summer.

The two Grade 1 fixtures, the AP Smithwick on July 22 and New York Turf Writers Cup, on Aug. 19, have been restored to their pre-pandemic purses of $150,000.

The Jonathan Kiser and Michael G. Walsh novice stakes are now worth $75,000 each.

The first steeplechase is scheduled for July 21.

IN ANOTHER major announcement, NYRA is reinstating its two major fall steeplechases at Belmont Park on Sept. 16, the $75,000 William Entenmann novice stakes and the G1, $150,000 Lonesome Glory, both of which were casualties of the pandemic last season.

Meanwhile, at Colonial Downs in New Kent, Va., which hosted three jump races last summer before the track was closed due to Covid, 14 races worth $435,000 have been carded by the Virginia Thoroughbred Association.

Most of the races are maiden hurdles, along with several ratings handicaps, and the featured $75,000 Randolph D. Rouse filly and mare stakes.

Two races will be run on Mondays for seven consecutive weeks beginning on July 19.

Though both meets run concurrently, the race conditions at Colonial and Saratoga are for completely different divisions of horses, and therefore don’t conflict.

Here’s a link to the official announcement: https://www.nationalsteeplechase.com/wp-content/uploads/2021/02/NoticePage_Feb26_2021.pdf
Visit Our Website